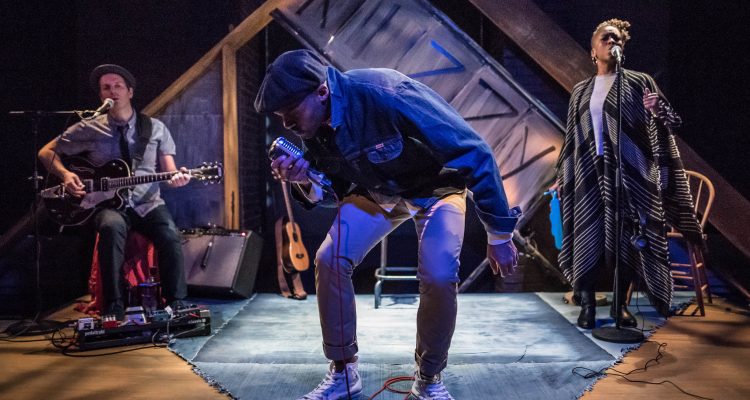 Co-created by JUNO-nominee Khari Wendell McClelland and Project: Humanity’s Andrew Kushnir, Freedom Singer is a rare musical journey through the history of the Underground Railroad and the songs that carried freedom seekers northward to Canada. Performed by McClelland along with JUNO nominee Toronto soul singer Tanika Charles and acclaimed Vancouver guitarist Noah Walker, the production will reach six more cities this September through October 2017.

Developed and produced by Project: Humanity (the award-winning company behind The Middle Place and Small Axe) in association with Crow’s Theatre and Vancouver’s Urban Ink, FREEDOM SINGER is the new documentary theatre piece inspired by the remarkable journey of singer-songwriter Khari Wendell McClelland (as featured on CBC’s The National and Tapestry). In 2015, JUNO-nominated McClelland retraced the steps of his great-great-great grandmother Kizzy and – using contemporary styles like hip hop, funk and soul – personalized the songs that likely accompanied her and thousands of others as they escaped U.S. slavery. In sharing this music, Khari is brought face to face with his own “unrecorded” heritage, and the realities and myths of one of our quintessential historic narratives: the Underground Railroad.