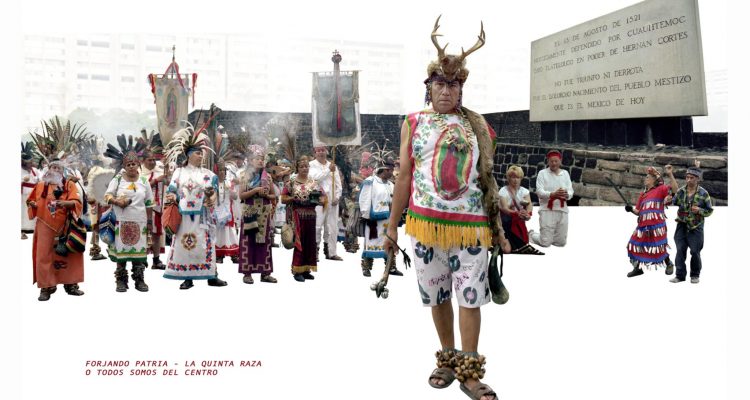 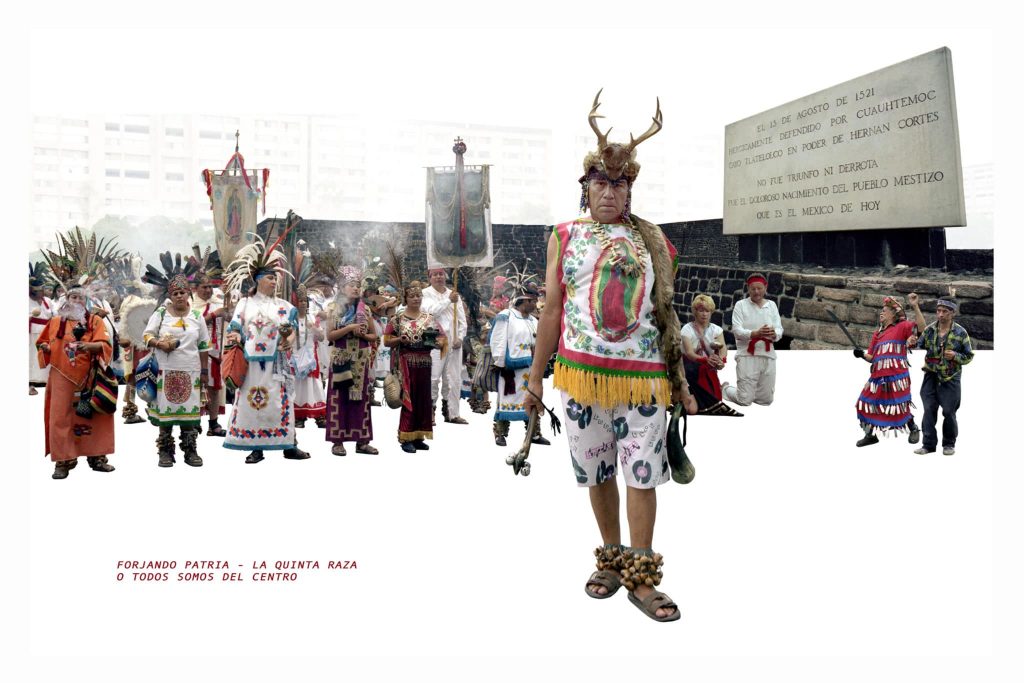 The ODD Gallery is pleased to present the exhibition Rituals of Identity, Tactics of Resistance by Montreal-based artist Eva Quintas.

For her show in Dawson, Eva Quintas will present a selection of images from an extensive body of large-scale photographic works begun during her 2004 residency at the National Arts Centre in Mexico City. Each image within the series depicts a “character of resistance” – a half-historical, half-mythological figure resulting from the artist’s creative collaboration with a group of traditional Aztec warrior dancers. Clothed in the rituals of pre-Columbian society, each character is jarringly juxtaposed against a surrealistic, urbanized backdrop, brimming with the iconography of contemporary Mexican society. In Quintas’ imagery, divergent and seemingly contradictory cultures collide; both time and space become condensed within a two-dimensional static photograph, all made possible by the artist’s idiomatic use of digital technologies to construct and collage her subject matter.”

Whether interpreted as fact or fiction, Quintas sustains a highly politicized tone throughout the work, owing much to the aims and ideals held by the Mexican muralists of the previous century.  Each of her constructed characters stare back at us in self-assured confrontation, demanding their presence be acknowledged within the conceptualized chaos of modern society.  By delving into the symbolic and fantastic, the work seeks to reorient our notions of cultural identity and, in turn, commands the viewer’s undivided attention.

Bio: Based in Montreal, Eva Quintas is a photographer and multi-media artist who has displayed her work in the gallery space, over the internet, and on the printed page.  She has exhibited in artist-run centres throughout Canada including VU Photo and SKOL in Montreal, YYZ in Toronto, and previously at the ODD Gallery as a member of the photo collective Atelier Fovea.  Quintas’  web-based projects have shown in media art festivals internationally, including Canarias Mediafest (Spain), Stiching Media Art (Netherlands), and FILE (Brazil).  In collaboration with author Michel Lefebvre, her cross-disciplinary work of photographic fiction, Liquidation, integrates the book, CD-ROM, web, and radio within a single creative framework.

Quintas has been awarded production grants from both the Canada Council and the Conseil des arts et des lettres du Québec and has participated in residencies in Canada, Mexico, and Senegal.  Her work can be found in the collections of the L’Université du Québec à Montréal and the Archives nationales du Québec.  She holds a Bachelor of Fine Arts degree from Concordia University.

Eva Quintas’ work at can be viewed at http://evaquintas.ca/