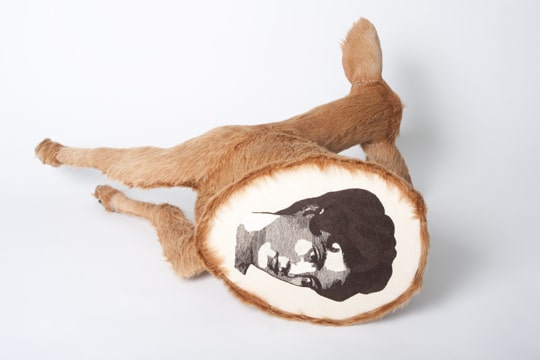 The ODD Gallery is pleased to present A Gathering:, a new installation of sculptural and embroidered works by Halifax-based artist David R. Harper.

Over the past few years, Harper has been developing his art practice and exhibition record at an increasingly prolific rate, resulting in an evolving series of projects that remain unified by a distinctive aesthetic and contextual centre. Often taking the form of startling replicas and representations of animals, including the human one—domesticated or far less so—the artist’s work situates itself within a new wilderness that is equally human and beastly in its design.

In Harper’s installations, animal/human interaction is cast against a backdrop of drastically re-mapped zones of habitat, prevalent cross breeding, and much-developed inter-species communication. This is a wilderness, the viewer quickly learns, that has developed its own discrete sense of culture.

In a number of previous projects, Harper constructed recognizable taxidermy-like “specimens” of nature that are frequently placed with domestic settings, creatures whose hides are often embellished with detailed decorative embroidery. Past projects have included skins marked with tattoo imagery (Rose of No Man’s Land, 2008), a blind-folded fox with its internal organs stitched onto its back (Fox 42, 2007), a bear posed on top of a fake fireplace (The Look and Feel of a Real Wood Stove, 2008) and a horse with a delicate art-nouveau inspired brand on its flank (The Last to Win, 2008). In When the Rain Comes (2008), Harper’s vision of a humanized natural order is evident. The installation features a pair of stuffed raccoons setting up a camper-trailer on some sort of Arcadian sojourn into nature, enjoying the company of some equally immobile, yet curious squirrels. The scene resembles a movie set, a staged cute postcard, perhaps a museum display. Upon closer inspection, the viewer notices a further level of artifice, a series of mysterious animal portraits inside the raccoon’s trailer (rabbits, fish, mice) that reveal, that in this world at least, animals are not exempt from the allure of fine art, or perhaps fine kitsch.

For his ODD Gallery exhibition, Harper presents a collection of five truncated deer sculptures, each with a portrait of a Victorian character hand-stitched into its abdomen, and two embroidered fur wall hangings. The works are at once sensually captivating and disturbing. Their recognizable forms, plush textures and mannered poses radiate a sense of curiosity and quiet reverence—these are forest animals, the sculptures remind us—and yet a sense of distress is palpable.

Beyond the dissected bodies and crude taxidermy technique, which looks more of a patchwork of skins, the finely sewn markings seem particularly unsettling: the prim decadence associated with this technique, not to mention the strong connotation of Empire suggested by the portraits themselves, belie a particularly cold set of cultural values surrounding colonization, social conformity, psychological repression and hierarchies of fashion. Similarly distressing is the sense of reciprocity, or hybridity that permeates these sculptures. The humans pictured amidst the animal forms are as lifeless as the carcasses themselves; like the taxidermied relics of the wild that continue to populate our domestic spaces and popular imagination, we too become exhibits in Harper’s natural history museum.

And yet, A Gathering: succeeds in moving beyond mere commentary on the adversarial effects of the human civilizing impulse. While this exhibition reveals the suspicion that our ideas of nature, as well as our representations of it, are vital components in our problematic relationship to the environment, the works nonetheless act to embrace art’s most fundamental promises—seduction, mystery and beauty. A Gathering: acts to re-discover and re-imagine the natural world as an authentic, relevant foundation of inspiration, artistic inquiry and cultural understanding.