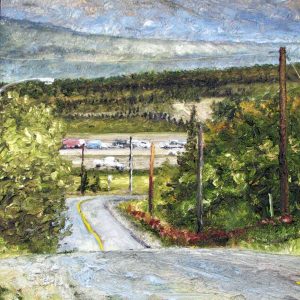 The ODD Gallery is pleased to present Yukon Drives, a selection of recent landscape and road-trip paintings by Whitehorse-based artist Nicole Bauberger.

Over the past eight years, since her first visit to the Yukon, Bauberger has been developing a highly individualized body of paintings—not to mention her own distinct process of working from the back of her Toyota—that repositions the rich tradition of en plein air landscape painting into decidedly more visceral and experiential territory. The sense of stasis or analytical distance that underpins much of the landscape genre, a sense of removal from the scene as the landscape is “captured,” gazed upon, reduced to its representation, becomes in Bauberger’s hands both a critical challenge and point of departure.

Bauberger’s Yukon is depicted from the perspective of the travel weary, from the subject in motion; the landscape maintains a residual sense of movement as if, upon stopping to survey the scene, the viewer’s (or painter’s) perception remains under the influence of the inertia of car travel. Her paintings reveal the experience of experiencing our surroundings, not just the landscape itself. They record the act of moving through these vast northern spaces as much as the scenes themselves. The effect is both physical and emotional.

The use of a serial approach to the Yukon Drives paintings becomes a central strategy for the artist’s project. The individual scenes take on a narrative, intimate quality as they move from frame to frame, painting to painting, building into something approaching a documentary—a diary of Bauberger’s travels. Paired with many of the artist’s written notes, a key element in the exhibition, each singular work becomes part of a larger vision that in the spirit of a travelogue aims to locate a sense of the personal within our collective social frameworks of leisure, tourism and transportation. Bauberger’s apparent interest in the way we experience the land inevitably becomes a question of how we use the land.

As such, Bauberger’s paintings, as well as the scenes they represent, remain liminal, in-between spaces. Her chosen subjects are rarely the famed vistas, rest stops or final destinations of the Klondike or Dempster Highways. Instead, the artist favours more defeatured scenes of passage, plaintive landscapes where recognizable signs and landmarks are largely missing and, in spite of the titles announcing each location, there exists an underlying sense of nebulousness to the whereabouts of each painting that speaks to the vastness of our great expanses, our understanding of our role in our surroundings, or lack thereof. In Yukon Drives, the road itself, not the landscape, often becomes the central image.

While Bauberger’s paintings belie a subtle criticism that our ideas of nature, as well as our representations of it—as seen in countless tour guides, post cards, nature books and calendars—may have been drained of some of their original significance and attention, they nonetheless retain a sense of hopefulness. In this light, the sense of “infinite longing” described by German writer E.T.A Hoffmann as one of the essential traits of Romanticism, seems an apt guiding metaphor for Bauberger’s work. Her paintings succeed in restoring a distinct quality of awe, contemplation and immediacy to the often moribund representations of nature we see around us.