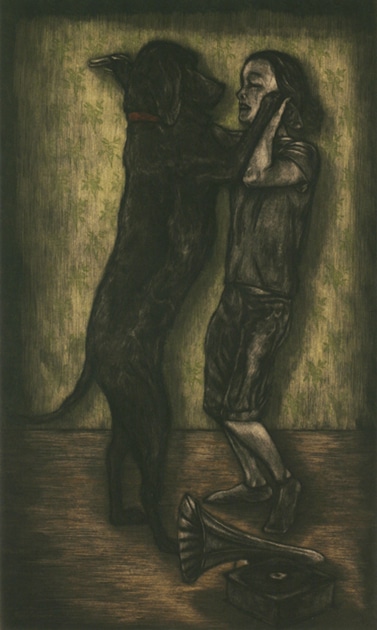 JUDE GRIEBEL | WITHIN THIS HEAD, WITHIN THESE WALLS

In my prints and paintings I knit together instances from my life with the plots of storybooks, folktales and ghost stories.  In this collaging of narratives, an interplay is created between memories, imagination, and the present, revealing personal metaphors, fears and expectations. Rooms become backdrops for imaginary and supernatural experiences.  The use of domestic settings in my paintings has become a way for me to condense and animate thoughts and memories in intimate and familiar surroundings.  These settings function as stages, where various ideas, dreams and memories can be revisited by the youths who inhabit these spaces.

These youths are engaged in solitary reflection and dreaming, which they use to reverse loneliness and boredom in impossible ways.  They often wear costumes, which they employ as tools of transformation, disappearance and disconnection from reality.  These costumes are often based on animal protagonists from storybooks, such as those by Beatrix Potter and Thorton W. Burgess.  In other situations, costumes are meant to conceal, rather than just transform the wearer.  In these instances youths are disguised as domestic objects, such as lamps and tables, or they are partially obscured by clouds.  My process often includes the construction of masks and props, which I model on myself and others before documenting them through drawing and photography.  Due to the concealing nature of costume, the stories and psychological states of the models often become evident through body language and atmosphere in the works.

The works are influenced by children’s book illustrations in the way that they are dramatically charged narrative images, seeming to rely on the presence of an accompanying text.  The absence of verbal explanation with my images (save for the titles) channels them towards obscurity, while an overlying familiarity with symbols and archetypes remains present.  In this way, the personal nature of my work is reflected, while connections are made to a broader cultural context in the form of literature and mythology.

In Jude Griebel’s paintings and prints, elements of storybook narrative and adult experience are combined to create scenes that have a foothold in both the real and imaginary.

Griebel received his Bachelor of Fine Arts from the Emily Carr Institute of Art and Design in 2003, and studied printmaking in Florence, Italy. His work has been exhibited in solo and group shows throughout Canada, as well as Europe, Japan, Korea and the United States.  Griebel was recently an artist in residence at Workshop OM in Yokohama, Japan, where he worked on drawings and etchings that bridged youth culture with ghost stories.

He is represented by Bau-Xi Gallery in Canada.  An exhibition of his works on paper is being organized and toured by the Burnaby Art Gallery in 2007.