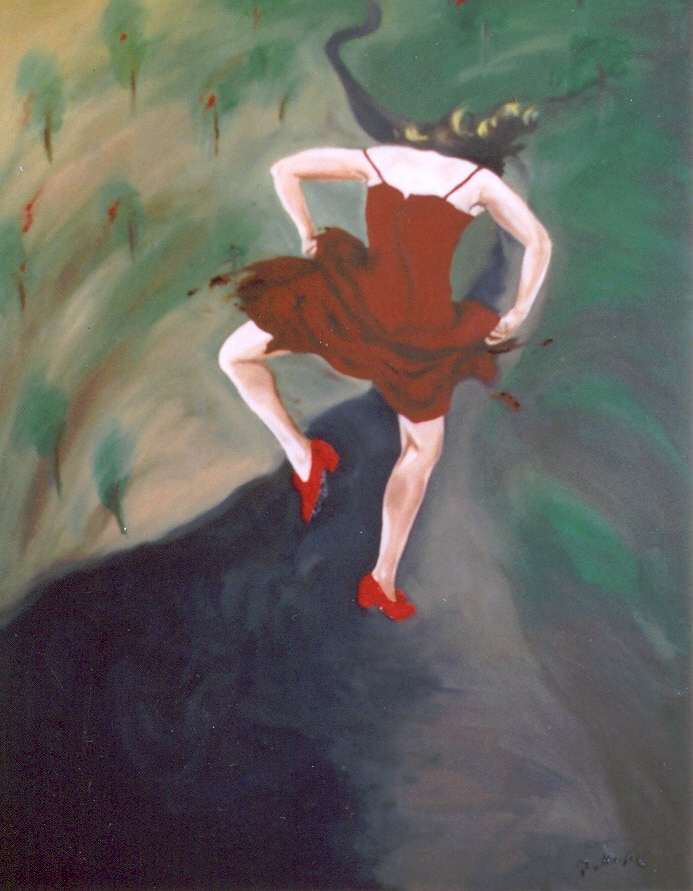 The works for this show are all paintings in oil on masonite board with addition of glued-on beads. The works convey many underlying ideas, like the role of the feminine in society; the need of but also problems with persona (mask); mythological stories and people’s (dis)comfort with nudity. The meaning is portrayed in a subtle way; letting the viewer absorb it over time rather that bombard the viewer with strong and explicit images (including text). Despite the gravity of ideas in the works, Pam believes that art should hit the emotions before it hits the mind. She prefers to explain after a viewer has looked at her works for a while. She wants to give people a change to respond with their own “heart, gut and mind” before showering him/her with rational and at times academic explanations.

Since the summer of 2002, she started to add beads to her works. At first, there was no particular thought behind it, other than that it looked good. Over time, she started to realize that the beads are the feminine element, that is compensating for the otherwise traditional and rather masculine medium of oil painting.

And what can an artist do more than speak for herself? Working with the figure in oil has often meant “work” for her, perfection to an extent, moments of disappointment and frustration, but also of accomplishment and achievement. It has always included being driven, with an invisible “thou shalt” and “not good enough” finger pointing at her. Working with the beads, on the other hand, has given her more the experience of play, joy, fun, a letting go, and acceptance of how the work is at the moment. It has allowed her to be rather than do. She just loves the two energies coming together!

On a more social level, she is making a statement about the value of bead work, of women’s work, of women’s ability to make art if only they were given the space and respect. She likes to think that she is contributing in a little way to the shift happening in society: the shift towards increased acceptance of and honor for the feminine in all of us and our culture as a whole.