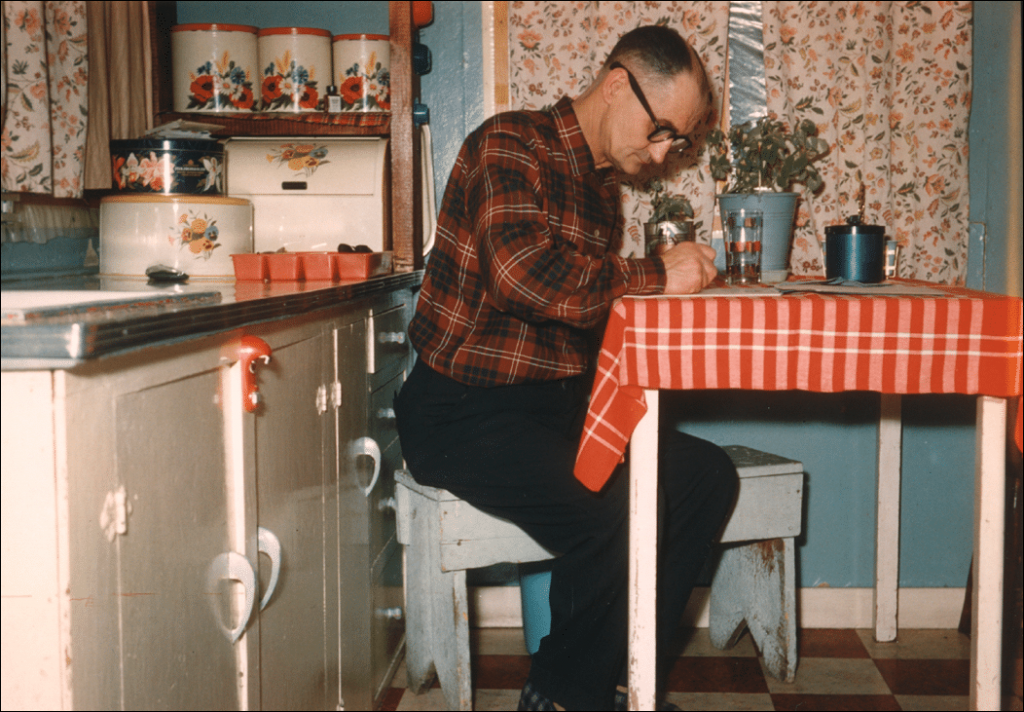 KENNEDY BRADSHAW | EVERY DAY LIFE: IMAGES OF THE YUKON IN THE 1950’s

Kennedy Bradshaw was a mechanic from Cornwall, England who moved to Keno City, a silver-mining community in the Yukon in 1952. Bradshaw was a self-taught amateur photographer who was committed to recording the lives of working people in this small isolated community. He had an empathetic attitude towards his subject but could also distance himself from the subjects because of his natural ability to capture a moment in the history of this community. When he died in 1981, he left several hundred 35mm Kodachrome slides and black and white negatives.

His subjects were the people that he lived and worked with in the community. Most of the people depicted in the photographs were Kennedy’s fellow employees, the miners who worked for United Keno Hill Mines. Many of the photographs, made in the 1950’s were of immigrants like him who came to the remote wilderness of the Yukon from middle European and Mediterranean countries. A large number of Bradshaw’s photographs were portraits within a particular environmental context and focused on the place and period of the time. Bradshaw’s style of photographic practice had its own particular aesthetic style and went well beyond simply documenting people and their environment. Bradshaw didn’t consider himself an artist but his photographs transcend the traditional documentary genre and attempt to evoke a sense of honesty, realism, and raw emotion.

This exhibition viewed as a whole, presents the viewer with a strong sense of cohesiveness of place and community. Most of Bradshaw’s work is intentional – many images represent house parties, picnics and the workplace and have significant historical and sociological value. The rich detail of clothing, furniture and decoration pull our gaze away from the central subject matter. The images in the exhibition depict the raw emotions of gaiety, shyness, loneliness and toughness and the underlying tensions of a mining town that is on the verge of disappearing. Through the photographs of children fishing, swimming, and playing, people with their pets, gathered in churches, bars, community centres and in each others’ living rooms, men working on machinery or in the mine, the viewer has been transported back in time to a community that has long since disappeared.

The photographs go beyond nostalgia and invite the viewer to speculate as to where the people of this community have gone and where are they now? The exhibition is a comprehensive and intimate study of the kind of company town that was so typical of many regions of Canada in the 1940’s and 1950’s. The richness of detail depicted in the photographs captivate the viewer as they recognize many elements from their own past. Bradshaw’s photographs tell the viewer a story about life in the Yukon in the 1950’s. Each photograph tells a story not only about the people but the environment that his subjects are depicted within. His photographs are constructed in such a way within pictorial terms that they become more than just simple documents. Bradshaw consciously constructs each photograph and plays with the frame and other pictorial elements within each image. Bradshaw’s work goes well beyond the mere depiction of time, place and history and leaves the viewer with a sense of realism. Bradshaw’s work is an attempt to redefine realist tradition by giving weight to everyday life that is typically used for events of great historical significance.

James Kennedy Bradshaw was born around the turn of the century in Polpeno Cornwall, England. The exact year of his birth is in doubt as 1904 was the year given on his passport, however, Bradshaw maintained that date was fudged for some reason and that he was actually born on July 28, 1900. Some clues to Bradshaw’s background have been gained from an article in The Powder Magazine, United Keno Hill Mines company newsletter, and from an English cousin, Mr. S. Norris Howard.

Kennedy Bradshaw left school at the age of thirteen and took an apprenticeship with Rolls Royce where he became a journeyman mechanic. When he was twenty-six or twenty-seven years old, he was working for his uncle, Norris Howard’s father, who owned a garage and general engineering business in Manchester, England. Bradshaw’s cousin was much younger than he and was confined to bed with rheumatic fever for lengthy periods of time. Norris Howard recalls that Kennedy entertained him by building a large model railway in his bedroom and also constructed elaborate Meccano models, which he could operate from his bedroom by a system of strings and pulleys attached to the headboard of the bed.

In 1952, Kennedy Bradshaw was hired on by United Keno Hill Mines (U.K.H.M.) in Elsa, Yukon. He started as a labourer and was a mechanic’s helper, mechanic second class, and finally an electrician second class by the time he retired. He was still employed by U.K.H.M on his 75th Birthday. Ida Bradshaw died in 1966. Kennedy Bradshaw died in 1981. They are buried in the Mayo cemetery, in the heart of the Silver Trail country, amongst the many Yukon friends they made over their years there.

The Curator gratefully acknowledges the Keno City Mining Museum, Robin Armour, the Odd Gallery, and the Yukon Arts Centre Public Art Gallery for their assistance in making this exhibition possible.