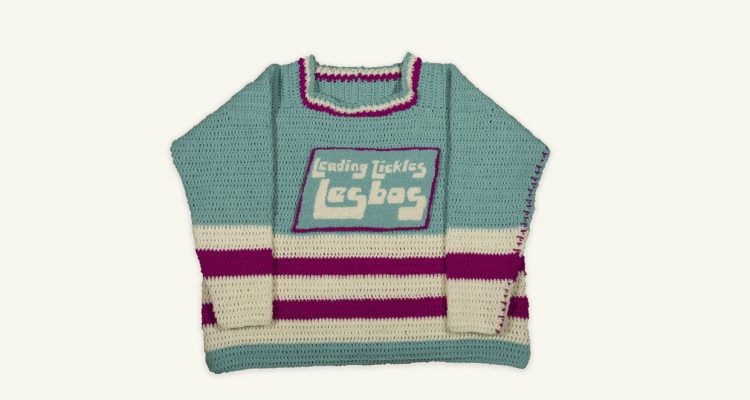 QUEER NEWFOUNDLAND HOCKEY LEAGUE (QNHL) is a fictional hockey league made up of 14 teams, all of which use pejoratives used against the LGBT2QIA+ community as team names. QNHL uses these pejoratives to reclaim the words often used against queer individuals both on and off the ice. These pejoratives, such as sissy and fag, are also often used against individuals who do not conform to the hegemonic masculinity often assigned to sports – teammates often cannot be emotional, cannot draw attention to themselves, nor talk about personal issues without fear of reprisal.

Each jersey is hand crocheted and rughooked, using craft practices often delegated as “women’s work”. Some jerseys are rughooked using pantyhose worn by drag performers, referencing the history of rughooking in Newfoundland and the Grenfell Mission’s use of stockings from women around rural communities in the province. Some jerseys reference historical teams from the numerous senior hockey leagues that have existed in the province’s history, while others utilise colours no longer found on NHL jerseys. For example, purple was quite a popular colour used on many jerseys such as the Los Angeles Kings and the Anaheim Ducks (then known as the Mighty Ducks), both of which have since switched to mostly black jerseys.

The jerseys are paired with 10 crochet goalie masks, stylized as doilies. These goalie doilies reference the introduction of the goalie mask and its first full-time NHL user Jacques Plante, who was ridiculed and mocked for wearing a mask after sustaining serious injuries during a game. Many players and fans questioned Plante’s bravery and dedication to the game due to his mask, though it gained acceptance after Plante compared not wearing a mask to skydiving without a parachute, “if a man jumps out of an airplane without a parachute, does that make him brave?”*. Each team also is paired with a hockey card of a fictional player, comprising of men, women, and gender-nonconforming characters. Each pack of hockey cards packed with a stick of ABC (already been chewed) gum.

LUCAS MORNEAU (he/they) is a queer interdisciplinary artist and curator of settler descent from Ktaqamkuk (Newfoundland and Labrador, Canada) and based in Sikniktuk in Mi’kma’ki (Sackville, New Brunswick). They received their Bachelor of Fine Arts in Visual Arts at Memorial University – Grenfell Campus in 2016, and their Master of Fine Arts (Studio Art) at University of Saskatchewan in 2018. They have exhibited artwork across Canada and the United Kingdom, including solo exhibitions throughout the Atlantic Provinces. In 2016, they were the winner of the BMO First Art Award for Newfoundland and Labrador and in 2018, the recipient of the Cox & Palmer Pivotal Point Grant. Their work has been supported by the Canada Council for the Arts, ArtsNL, and Cox&Palmer with VANL-CARFAC. Using photography, fibre art, performance, video, installation, printmaking, and sculpture, their work is autobiographical and based in social activism. Through the alter-ego The Queer Mummer, they deconstruct gender norms and challenges homophobic and heteronormative attitudes still prevalent in Western society.