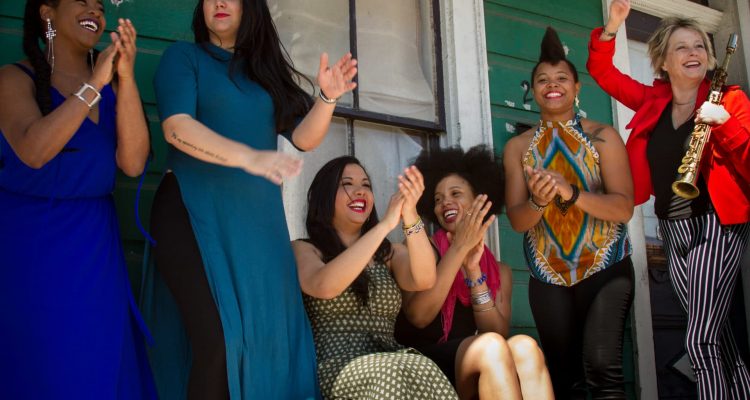 A long-time jazz musician on the Canadian scene as a leader, soprano saxophonist and flutist, JANE BUNNETT began digging deep into the music of Cuba during a trip there in 1982, and falling in love with its intricate folkloric Afro-Cuban rhythms, blending them with contemporary jazz sounds.

Bunnett has been credited with introducing a lot of great Cuban musicians to North American audiences over the past couple of decades, including Dafnis Prieto, Yosvanny Terry, Pedrito Martínez and David Virelles. Her latest project is an assembly of all-star Cuban musicians, a sextet which includes herself and five extraordinary young females.
Maqueque (meaning “the energy of a young girl’s spirit”), formed five years ago. This group follows in the Bunnett tradition of ensembles featuring not only phenomenally talented players, but also great chemistry amongst the musicians.

Jane Bunnett and Maqueque (pronounced Mah-keh-keh) includes Jane, on flute and soprano sax, virtuoso drummer Yissy García, dynamic percussionist Daymé Arceno, (also a powerhouse vocalist), Yusa on tres guitar and fretless bass, pianist Danae, and Magdelys on batás and congas. All turn in great, inspired performances. However, it is the group dynamic, deep listening, empathy and superb communication that come to the fore.

Bunnett has been nominated for Grammy Awards (including the Best Latin Jazz Album in 2018 for Oddara, recorded with Maqueque) and numerous Juno Awards. She received the Order of Canada, The Queens Diamond Jubilee medal, and the Ontario’s Premier’s Award for Excellence. Her exploration of Afro-Cuban melodies expresses the universality of music, and her ability to showcase the rhythms and culture of Cuba has been ground breaking.

Co-presented by Whitehorse Concerts, funded by the Canadian Arts Presentation Fund, Sponsored by the Downtown Hotel