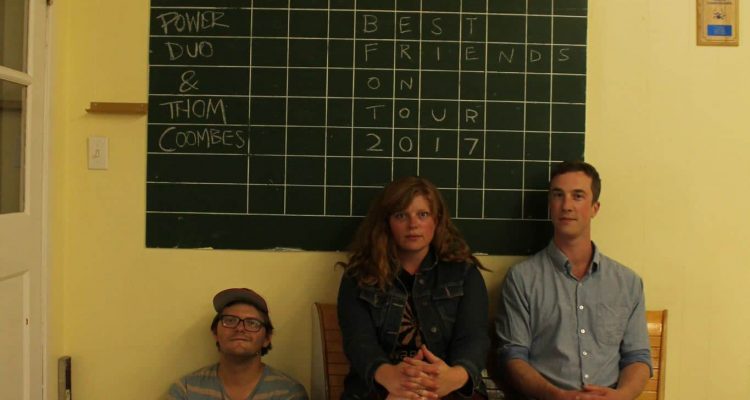 Fresh off the road, Thom Coombes and Power Duo arrive just in time to celebrate the 17th annual Yukon Riverside Arts Festival! It’s going to be a wonderful Friday night full of music!

THOM COOMBES
“A rare wordsmith backed up by the originality, and sui generis cult appeal of a Shotgun Jimmie or Silver Jews or Bill Callahan.” – The Overcast

Influenced by the distinct aesthetic of home recordings, at a young age, Thom Coombes began recording his own songs in a basement with a boom box and a built-in mic. For the past 15 years, Thom’s recording process remains much the same, traversing bedrooms, basements, and bathrooms with a Tascam 4-track cassette recorder, an old computer and a touch of digital production, capturing a unique, lo-fi sound ranging from country and folk, to stripped down keyboard based pop songs.

Thom’s sound is gentle and earnest. With mesmerizing guitar and lyrics that echo everyday life, Thom turns the mundane into woeful, heartfelt stories with a touch of comedy, simplicity, and a whole lot of honesty.

Thom’s latest album, Old Stomping Grounds, was released in May 2017 and he has been zigzagging across the country ever since.

POWER DUO
The brainchild of solo artists Naomi Kavka and Corbin Spensley, Power Duo is a musical force. Fresh off the stages at Artswells and Cold Snap, the band is quickly gaining momentum.

Blending cello and acoustic guitar with their special brand of Northern BC folk, Power Duo needs no bells or whistles. They craft a powerful sound that hushes a crowded room on the very first note. Power Duo’s songs are bare boned, absolutely beautiful stories from a personal perspective that anyone can find a home in.

Their first album, Self-Titled, was released in late 2015 and Naomi’s full-length debut, “Slammed Doors & Severance” will be released this fall.