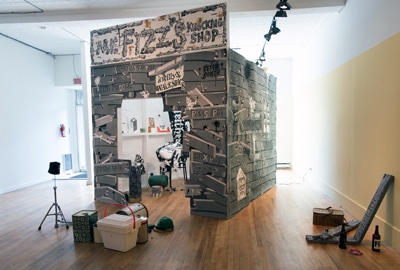 Artist Talk: 7:30 PM in the KIAC Ballroom | Reception to follow

My work consists of large format drawings, massed hangings of smaller, poster-like works, rangy paper constructions and laconic found objects.  The works are installed so as to create a drawn environment, a saturated visual space loaded with imagery and possessed of a sort of Rococo impulse that leans towards patterning, excess and distortion.

The work is generated by impulse and whim and the fetishizing of objects and obscure cultural phenomena (milk crates for instance, have been a fixation for some years, albeit altered or repurposed). I am drawn to making stews of things – obscure associative narrative conglomerations – a-temporal and discontinuous. In my works, Psychedelia, Victoriana or Hillbilly backwoods can run together. The characters and objects may reference Elizabethan Ex-Libris, 70’s analog electronic musical instruments, 60’s children’s annuals or current iconic product packaging and jingoism. Process and crafting are similarly divergent – intricate and laborious works with pronounced optical buzz coexist with crude forms that signal like pre-school toys.

I am preoccupied with non-sequiturs, inappropriateness, cheek or truculence, shabbiness and disorder. In many ways I like to debase things, to embrace the rotten or tasteless and I am interested in genres when they are sullied and bastardized.
BIOGRAPHY

Adrian Norvid was born in the U.K. and currently lives and works in Montreal. His production focuses on immersive drawn environments with large-scale drawings, paper constructions and modified found objects. Norvid’s concerns center around popular imagery, vernacular and kitsch with sources ranging from Psychedelia to Georgian era illustration.  Recent shows include: Wrongo and Finkola High/The Cantankerous Krank at Galerie Joyce Yahouda in Montreal; Shit House and Dummkopf at Galerie Julia Garnatz in Cologne, Germany; Goodnight Irene with Jason Mc Clean at Jessica Bradley Art and Projects in Toronto; the Montreal Triennial; and Showstoppers, Whoppers, Downers and Out of Towners which toured to the Art Gallery of Windsor, the Robert McLaughlin Gallery in Oshawa, the Rooms in St Johns and the McIntosh Gallery at the University of Western in London, Ontario. Adrian Norvid is represented in Montreal by Galerie Joyce Yahouda. Norvid’s book Nogoodniks was published by Drawn and Quarterly in Montreal in 2011.