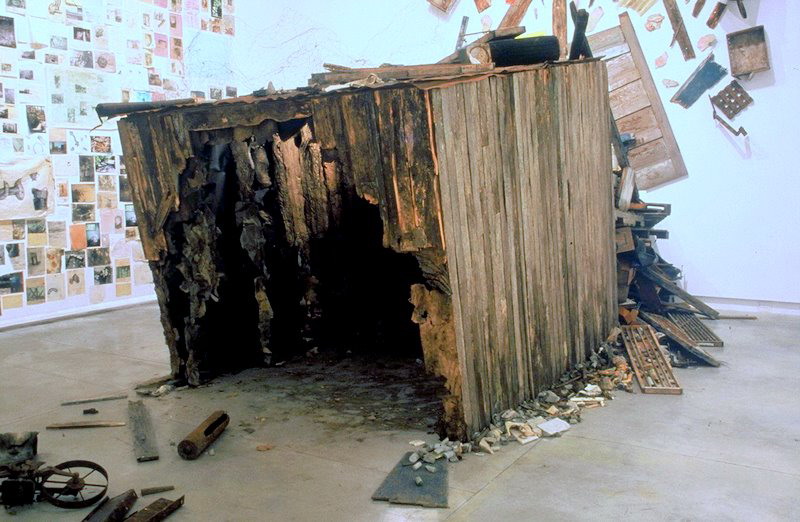 Reception: 8 pm in the ODD Gallery

Langergraber’s newest project is an immersive installation that draws on a decidedly pastoral vernacular of backwoods survival, pioneer tales and foundational myths. Partially Buried presents a series of drawings, sketchbooks, found objects and a constructed cabin within the ODD gallery’s walls that give evidence of an absent former inhabitant. This character–a solitary adventurer reminiscent of Henry David Thoreau, Christopher McCandless or perhaps even Ted Kaczynski–has clearly chosen a life in the seclusion of the wilderness, free from the civilising impulses of social obligations, pressures and relationships.

The artworks and objects left behind by our absent character reflect both the pleasures and pitfalls of the survivalist imagination. Here, the utopian gesture of going “back to the land” suggests a spirit of uncanny creativity and improvisational innovation, as well as its shadow side–loneliness, alienation and mental disintegration. While the character’s drawings of animals, natural forms and detailed plans for an intentional community reveal a vision of perfected natural living, they ultimately highlight a sharp contrast with the dilapidated shack and manufactured refuse in the installation. The pastoral sublime becomes, in Langergraber’s work, a vanishing point of utopian thought, an ideal that can both inspire and injure.

Referencing Robert Smithson’s infamous “Partially Buried Woodshed” (1970)—a benchmark work in the history of land art–Langergraber looks at the ways in which entropy and disintegration affect ideological structures as well as physical ones.