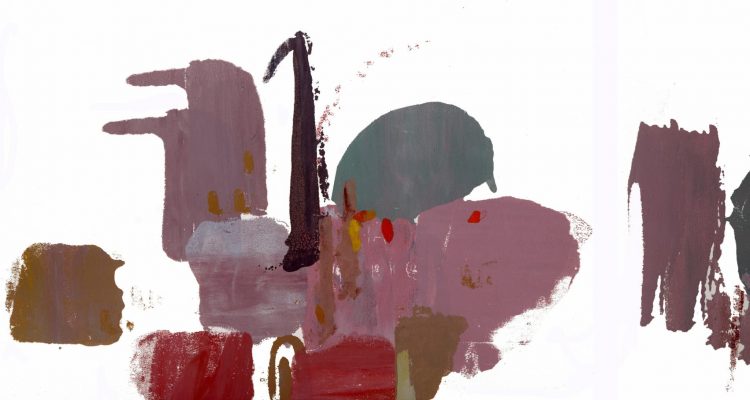 The ODD Gallery is pleased to present In One Here and Out the Other, an array of new screenprints by TODD STEWART.

Stewart’s exhibition, made during five weeks as artist in residence at KIAC, reveals an improvisational, process-based approach to creative practice that works with images from sets of contrasting realities: awake/sleep, real/imaginary, now/another time, Montreal/Dawson City. These are works that place as much weight on experimentation and production as in the final conclusions of his work.

Evolving out of his past work as a well-known rock ‘n roll poster designer, and the more figurative works created under the auspices of Bree,ree—the artist’s design studio—this exhibition finds Stewart moving into far more abstract terrain. Two of the large-scale multi-panel works for In One Here, for example, show Stewart working alternatively with minimal, almost weightless gestures (“Carmacks-Stewart Transmission Project”) and densely layered blocks of colour (“Wall of Fire”). In each instance, form and structure seem on the verge of either drifting away or collapsing under the weight of their own solidity; divergent in appearance the pieces nonetheless suggest correlations between the process of building/creating and the construction of meaning.

Not unlike a Rorschach test, In One Here highlights the psychological and emotive effects of looking, the highly-subjective ways in which we reconcile the perceptual mystery of the abstract within our more concrete forms of understanding and language. The works in this exhibition offer the viewer clues, hints and frameworks for reference, but ultimately propose an idea of comprehension that is emergent and fleeting, something that perhaps tells us more about ourselves than the images’ own conclusion, intention, or pictorial elements. Stewart’s evocative works provide an outlet for a participatory imaginative encounter—a site for dreaming, wayward thinking and the pleasures of discovery.

Trained in the fields of architecture and urban planning, Stewart displays an appreciation for the process of construction, and a poetic understanding of visual space. Through a repetition of simple forms and shapes—with an eye to qualities of transparency, light and colour–Stewart’s works find meditative/aesthetic resonance through the process of automatism and inherent element of chance that uniquely characterize the printmaking process.