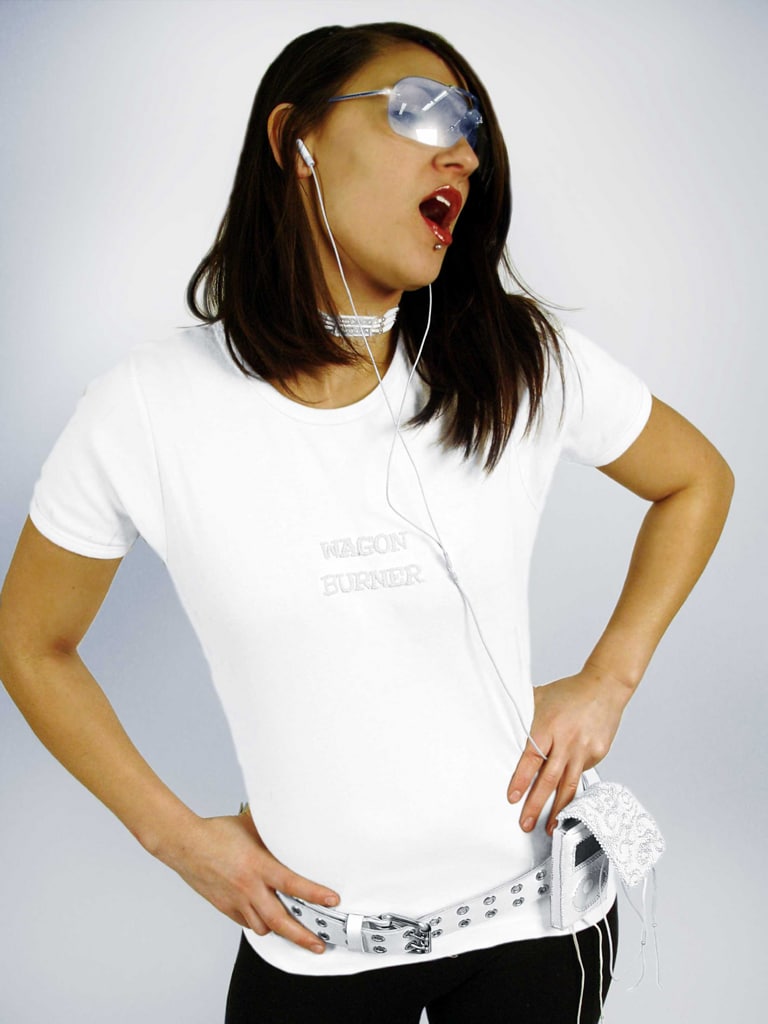 Cyborg Hybrids is a digitally altered photo series that attempts to challenge our views towards mixed race classifications by using humorous text and imagery from two cultures.  The subjects are Euro-Aboriginal artists who are forward thinkers and plugged in with technology.  They follow the doctrine of Donna Harroway’s Cyborg Manifesto [1], which states that a cyborg is a creature in a technological, post-gender world free of traditional western stereotypes towards race and gender.  I am Scottish and Oji-Cree descent and I started exploring this new classification when I felt pressured to culturally identify, amongst the many existing stereotypes and misconceptions about those of mixed ancestry.  When society refers to Aboriginal people, there is an inevitable linking to the past and I was tired of this assumption placed on myself so I focused on creating a new structure using the cyborg as the base to represent the influence of technology on my own sense of cultural identity.

I photographed artists that I met across Canada who fit the Cyborg Hybrid criteria and had them wear my white t-shirts with beaded text such as “AUTHORITY ON ALL ABORIGINAL ISSUES”, “INDIAN GIVER” and other slogans that would illustrate common Aboriginal stereotypical thought.  I also created white chokers for them to wear and photographed them in stoic poses, mimicking photographs of Aboriginal people from the 19th and early 20th century.  I then digitally altered the photos to resemble those found in glamour magazines.  However, their defiant poses challenge the viewer to culturally locate them as anything else other than as a Cyborg Hybrid.  I recognize the impact stereotypes may have had on my subjects, yet I attempt to render the words powerless.

A graduate of Concordia University’s Bachelor of Fine Arts program, KC Adams has had several solo exhibitions, most recently Cyborg Hybrids at Gallery One One One, the Art Gallery of Southwestern Manitoba, and Cyborg Living at The Museum of Contemporary Canadian Art in Toronto.  She has also been featured in numerous group exhibitions, Cyborg Living Space II, The Language of Intercession at the OBORO Gallery in Montreal, Cyborg Hybrids at PHOTOQUAI biennale in Paris, France.  She maintains her own website at www.kcadams.net showcasing her work and flash art projects. She has participated in residencies at the Banff Centre, the Confederation Art Centre in Charlottetown and the Annex Gallery in Winnipeg.  Her many community activities include teaching workshops and serving as president of the Board of Directors of aceartinc. in Winnipeg from 2000 to 2004.  Her Cyborg Hybrid Winnipeg and Banff Series can be found in the permanent collection of the National Art Gallery in Ottawa.  She has received several grants and awards from Winnipeg Arts Council, Manitoba Arts Council and Canada Council for the Arts.