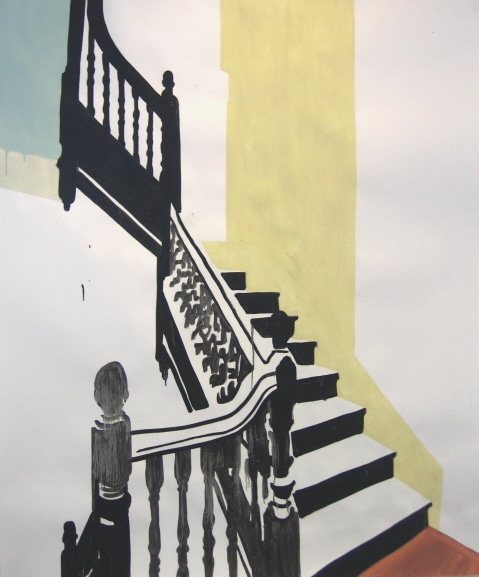 “She felt the world around her suddenly out of reach. Not only was she exiled in Paris, she was exiled from the whole world. The people sitting on the sidewalk terrace, the people who were walking in the street, they were insubstantial, they were shadows; the houses were nothing but painted backdrops with no depth.”

She Came to Stay

Throughout the past year I have participated in numerous visual art residencies that have taken me to different locations geographically. I have been lucky enough to call Banff, Vancouver, Japan, Ivvavik National Park, Toronto, Trinidad, Norway and Iceland my home. In an attempt to produce a coherent body of work I have found that images began to overlap and collage themselves upon my memory, certain regions became a blur and upon the early stages of travel burnout, the mind stopped registering altogether.

I am intrigued by this dropping away of details, of not fully absorbing our surroundings. An emptiness or void is created where images are not fully registering in our minds, giving us nothing. We seek answers but are only given more questions. I strive to develop my paintings in this way. They are brief glimpses into landscapes and moments that may or may not ever fully develop into what they truly are. I want the work to remain open and let the viewer fill in the blanks, to absorb and construct what they are seeing for themselves.

The title of the exhibition is based on the Icelandic band Sigur Rós’ fourth CD. First released in October 2002, the album’s title consists of two opposing parentheses – ( ). It has no official title and fans have referred to it as “Parentheses“, “Brackets“, or just “The Untitled Album” (the listener is free to make up his/her own title since there is essentially none). It is comprised of eight untitled tracks and the album’s entire packaging is completely free of text and markings. The bands singer, Jón Þór “Jónsi” Birgisson, sings in the made-up “language” which the band calls hopelandic. This is not really a true language, it is essentially just vocals that fit with the music, like another instrument. Since there are no lyrics, the listener is invited to write in or illustrate his/her own interpretations of the songs onto the blank pages in the album’s 12-page booklet.

Sigur Rós has stated that with their music “there is nothing to hold on to, just the music“ and that “people were interpreting the songs based on their own lives and atmospheres.“ The band enjoys the feeling that the CD seems unfinished and that people have to finish it themselves. Although not directly linked and inspired by the music of Sigur Rós, this exhibition draws on similar ideas and feelings in which each painted image – and the installation as a whole is open to interpretation by the viewer. While ( ) may represent a void or emptiness, the interpretations that the viewer brings to the paintings will be full of life and atmosphere.

( ) offers no information when searched on Google, just a blank page. ( ) can also refer to a “hug” in SMS and text messaging.