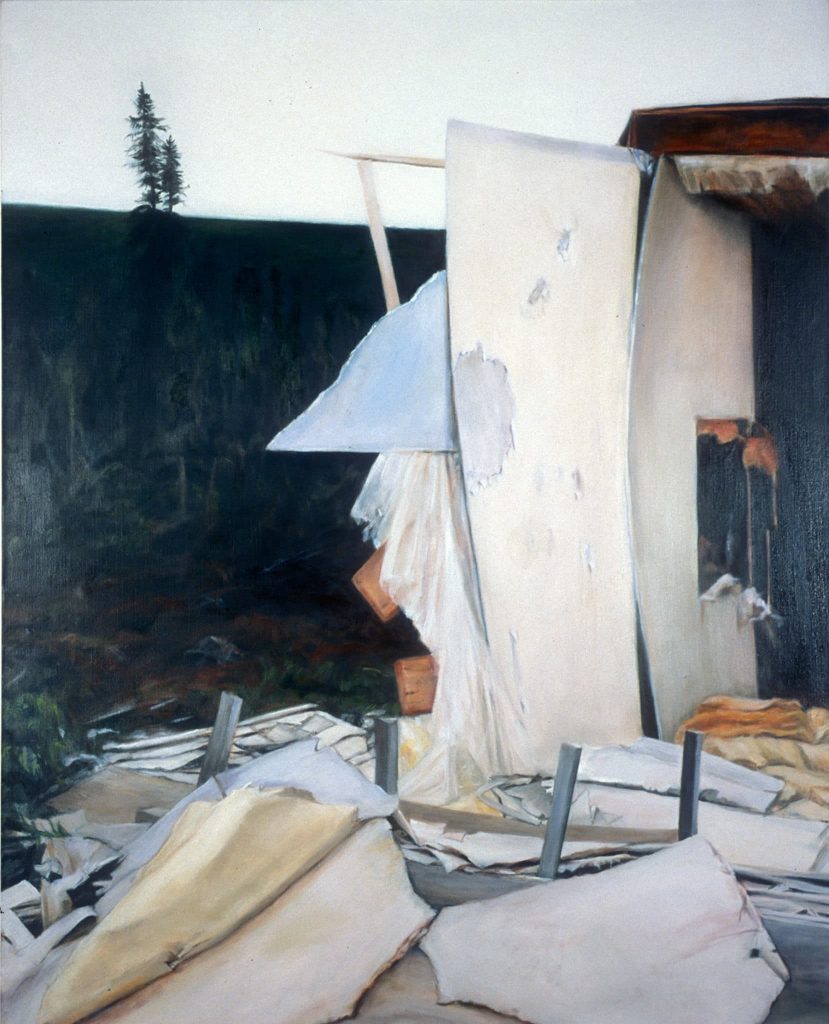 “Every painting is an answer to randomness.”

The paintings in Salvage reflect on the passage of time and its inherent losses in an age of speed and mobility. They are also meditations on the futility of painting in a time when the existence of technological means allows us to capture, even alter, an image instantly. In photographing and painting the discarded and decomposing objects from buildings and industries in decline–from the litter of abandoned homesteads to the Dawson City mining dredge, and more recently, the World Trade Center site– this work measures and mourns the increments of time passing, and also attempts to halt or slow its movement. The act of choosing specific moments to shoot or paint arrests the insistent, unstructured flow of time and gives meaning to a tiny piece of it. The often fuzzy, degraded quality of the images echoes the indistinctness of memory. As objects not of, but post-desire, they poignantly reveal our inability to hang on to what is most meaningful to us – our homes and possessions, our workplaces, our lives. They are metaphors for the process of change as well as subtle reminders of our own short shelf life.

While the paintings mine physical history for the details of a once meaningful existence, I am not interested in reconstructing the past from these relics as an archaeologist would. Rather, through examining and recreating these objects out of context, I use them to explore the poignancy and at times, the beauty, in the accident of being alive. They are meant to exist in a realm somewhere between the physical and the spiritual as post-mortem records.

This work first began to take shape in 1999, the year I moved to Saskatchewan. Within a short period, I had packed up and left behind not only an apartment in New York City where I had lived for twenty years, but also the belongings and home of my parents who moved into a long term care facility. The work became a meditation on the passage of time and the futility of acquisition. Many of the paintings recall the Baroque tradition of Vanitas Still Life, in which the artist included objects of wealth and ambition — jewels, coins, silver, mirrors, books on art and culture, globes, crowns and armour– alongside skulls, rotting corpses, snuffed out candles, hourglasses, and clocks. The message was clear: Life is short and earthly pleasures are insubstantial and fleeting. These paintings, known in 17th Century Spain as Desengano del Mundo (Disillusionment of the World) admonish the viewer that the path to salvation is to be found in rejecting riches, power, beauty, and other corporeal pursuits. While my work focuses on the temporal nature of existence, it suggests that if there is any salvation, it is embracing the process of change and finding poetry in its losses. The word salvage means to save or rescue a thing from the wreckage, and to preserve it, even to make it good again. The act of painting these deteriorating objects is in effect, salvaging them from oblivion, preserving their dignity and possibly, finding meaning in the process.

Betsy Rosenwald moved to Saskatoon in 1999 after 22 years in New York City. Born in Boston, she first traveled to the prairie province in 1990 to attend a retreat for artists and writers sponsored by the Saskatchewan Writers Guild. After several years of travelling back and forth to Canada, she settled here permanently. Rosenwald received her BA from Beloit College in Wisconsin, and an MFA in painting from Brooklyn College in New York. Her work has been exhibited throughout North America and internationally in England, Italy, and Japan. She has received fellowships from the New York Foundation for the Arts, Art Matters Foundation, the Saskatchewan Arts Board, and The MacDowell Colony. In July 2003, she was Artist-in-Residence at the Klondike Institute of Art and Culture in Dawson City, Yukon.

In addition to her art practice, Rosenwald works as a graphic designer of print publications in Saskatoon. She recently designed a limited edition book of poetry by Steven Ross Smith and Hilary Clark entitled Pliny’s Knickers for JackPine Press. She has also worked extensively as a scenic artist and set decorator for television, print, and film. She lives in Saskatoon with her husband, John and their dog, Arlo.