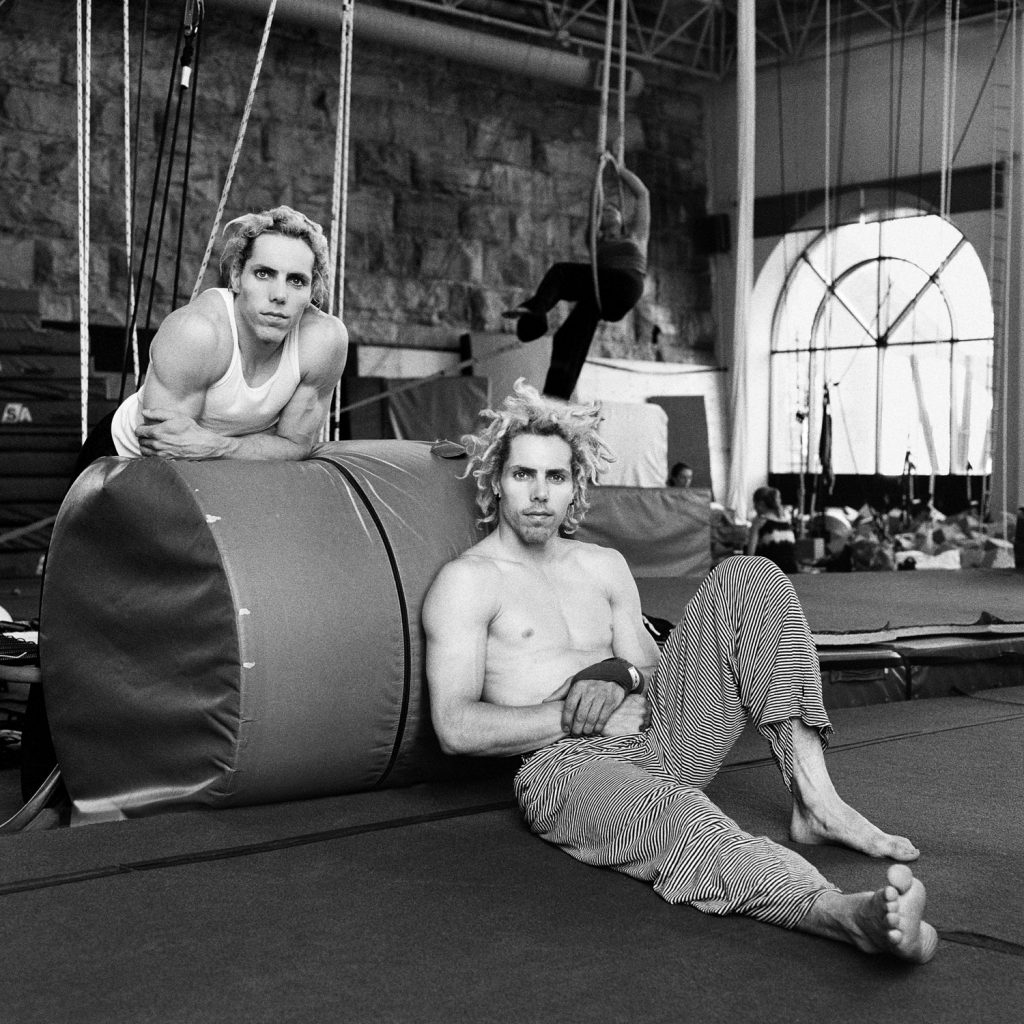 Capitalizing on the multiplicity of an individual’s personality and the many selves housed within all of us, Pierre Dalpé approaches each of his subjects with a duplicitous heart: he twins his subjects within the frame to expose the construction of identity while questioning the authenticity of the photographic image. Interested in the process of transformation, Dalpé collaborates with his subjects to express different facets of their personalities. Through this partnership, he is able to coax out identities that lay just below the surface, blurring the boundaries of who is real and who is not, producing family portraits derived from a single subject. Capturing two and sometimes three personas, Dalpé manipulates these portraits in a digital environment, placing them side-by-side within his frame to expose the construct of “truth” in documentary photography. By playing with era, gender, costuming, setting, subtle theatrics, poses, and appearance, Dalpé constructs images that both take advantage of these superficial elements for their formal qualities, and question their authenticity for the viewer, ultimately challenging his audience with the very elements that make up his photographs. The simultaneously historic and timeless quality of his images further adds an aura of nostalgia to the viewer’s experience, authenticating the image through its masquerading historical context.

Intermingling “real” twins with those he has constructed, Dalpé relies on the viewer’s quest for narrative within the photographic frame and our culturally voyeuristic obsession with individuality. This mélange of the real and the unreal capitalizes on our cultural need to label, categorize, and catalogue, blurring the boundaries between illusion and truth. Our cultural attraction to the bizarre is revealed to ourselves as viewers and is further complicated by the trusting relationship between the subject and their photographer. In essence, the viewer twins Dalpé: taking his place with the subject and realizing the unreal relationship that Dalpé originally envisioned with separate facets of the same person. The viewer completes the relationship by experiencing these new personas as twins and triplets, different people both inside and outside the frame.

Unmarred by the telltale signs of digital reconstruction or the science-fiction like realities of genetic cloning, in vitro fertilization, or fertility drugs, Dalpé ’s twins dig deep into the construction of ego where facets of identity are isolated, separated, labeled, and captured, producing a doppelganger reality for the subject that lives on outside of the frame. Once captured, the subject’s twin is released into reality for the viewer who interprets the image as authentic. Only after seeing the series in its entirety, comparing one image with another, does the viewer begin to gently question the authenticity of the image. Although Dalpé’s practice is steeped in image manipulation, one of the great strengths of his work is that he is able to capture a vulnerability in his subjects not once, but twice and three times – allowing the viewer to be swept away by the jaunting clarity of the portraits themselves. Taking advantage of the emotive and spontaneous codes of documentary photography, Dalpé’s twin and triple sets unassumingly pose for the camera and expose a haunting depth that has been seemingly revealed in a single moment.

Pierre Dalpé is a Montreal-based artist whose work is a fusion of traditional and digital photography. Dalpé received a B.F.A. in Film Studies and photography from Concordia University in 1993, and his photographs have been published and exhibited in Canada, the United States and Russia. Dalpé has participated in Artist in Residence programs at The Banff Centre (1999 and 2000) and The Klondike Institute of Art and Culture in Dawson City, Yukon (2003). He has received grants from both the Conseil des arts et des letters du Québec and the Canada Council for the Arts for his current series, Personae. Personae was recently exhibited at Galérie Observatoire 4 in Montreal, and will be shown at Galérie Vu in Quebec City in October of 2005.