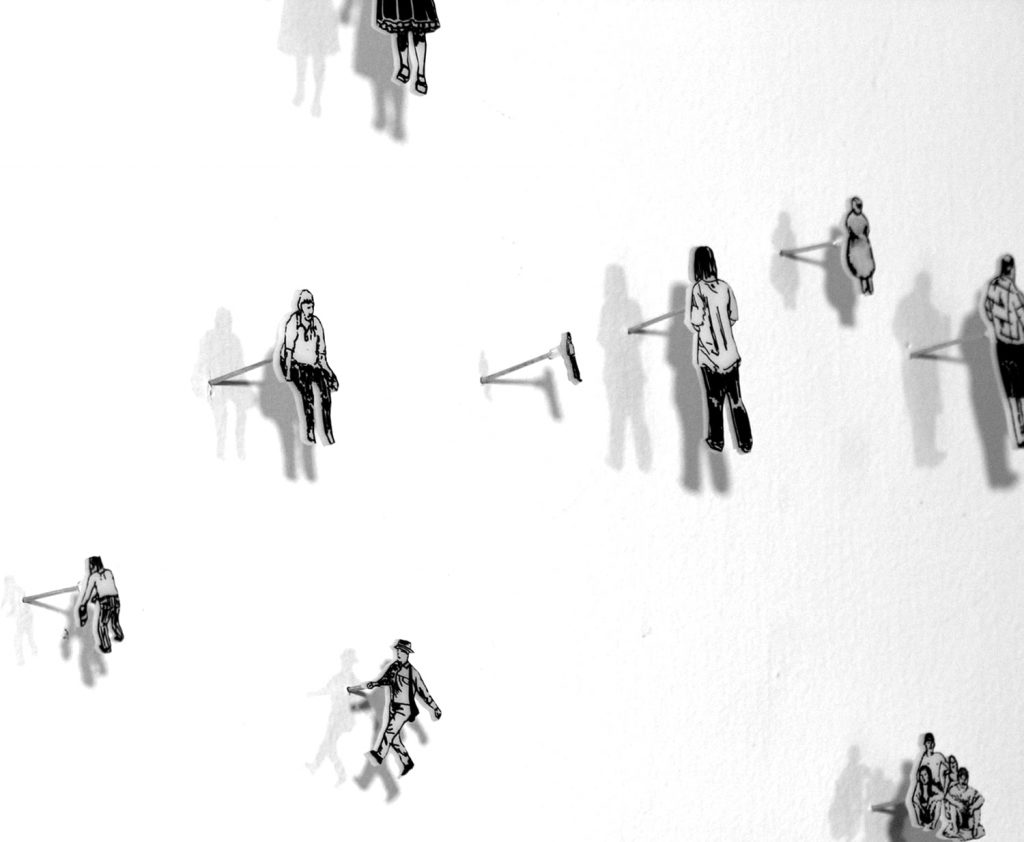 Arrivals and Departures in The Banal Sublime

If miniature things recede into the past, giant things get closer, become our immediate future. All these unexpected fantasies come gradually into focus from a long distance away or appear delightfully around a curve, like instant postcards come to life. Speed flattens, leaving photos in the mind.

The notion of the sublime experience in landscape, one often associated with 18th and 19th century painting, will never be what it was.  With the advent of mass travel (particularly air travel) the romance of the ‘remote’ is harder to come by.

The works featured in The Banal Sublime spawn from an ongoing interest in tourism and the complexity of viewing landscape as visitor. Famous waterfalls, massive canyons, and esoteric architecture–sites that have the distinction of being awe-inspiring magnets for tourism– are so thoroughly photographed that we need not physically visit such places to feel, perhaps prematurely, that we understand them. Discussion of travel inevitably leads to discussion of snapshots, souvenirs and the privilege of leisure. The intimate scale of the snapshot or souvenir is often in direct conflict with mainstream tourism and its propensity towards spectacle and gigantism. My interests reside here, in the intersection of knowledge, scale, and representation.

Using the myths, histories, and narratives of 3 sites I have never visited– Angel Falls in Venezuela, the LAX airport, and the parking lot at West Edmonton Mall- I hope to confuse or re-articulate relations between discovery and the individual traveler. Each site is rendered in miniature without the expectation of realism or accuracy. Conventional miniatures, such as model railroad layouts and dollhouses, allow one to create a scene of frozen nostalgia, a utopic memory. By creating small-scale representations of sites unlikely to be found still, I hope to challenge the nostalgic inertia often expected of miniatures.

Is the everyday experience, the otherwise unspectacular, capable of being sublime? Could the anticipation we experience when we embark on travel give way to a new experience of the banal? Both spontaneous and orderly, the work featured in The Banal Sublime, is an amnesiac overlapping of many individual sculptures, incapable of being the same landscape twice. I hope to create a space in which we might imagine ourselves shrunken, able to wander its landscape, and uncover its artifice.

Crystal Mowry is an emerging artist and professional nomad currently dividing her time between Guelph and Toronto, Ontario. She is a graduate of the Ontario College of Art and Design (AOCAD, 2000) and the Nova Scotia College of Art and Design University (MFA, 2002). She has exhibited her work nationally, including exhibitions at the Art Gallery of Calgary, The Khyber Centre for the Arts (Halifax) and Queens Park (Toronto). Her recent projects include a collaboration with Panya Clark Espinal (as Liminal Solutions) for the Manchester Letherium Ideas Competition currently on display at the Cornerhouse Gallery, Manchester, UK.