On January 1, 2020, KIAC celebrated 20 years of enriching the lives of Yukoners and visitors through the development and promotion of arts and culture. In the spirit of KIAC’s grand opening event – the “Odd Ball”- held on the eve of the millennium, we marked our twentieth anniversary with a New Year’s Eve “Odd Ball 2020” as the clock turns to 2020.  We have a lot to celebrate.  Aside from being a well-deserved birthday party, 20/20 also constituted a special fundraising campaign to help KIAC continue its mission into the decades to come.

However, twenty years of activity have taken their toll on KIAC’s home in the renovated Odd Fellows Hall.  This historic Dawson landmark, built in 1901, is used year round not only for KIAC programming, but for a variety of community and private functions. The KIAC Ballroom is a highly desirable location for meetings, events and conferences, many of which attract visitors from around the globe.

Financial contributions from a variety of funders, corporate sponsors and private donors have allowed us to make basic critical repairs and renovations to the facility over the years, but keeping the building and equipment in good shape for both KIAC programming and community use is an ongoing challenge.

To this end, the KIAC Board of Directors embarked on a 20/20 Fundraising Campaign.  We required a capital reserve that allows us to make improvements and upgrades to the building and equipment as the need arises.  These improvements are needed to ensure that we continue to offer exceptional programming and a well maintained facility to our many community users.

The 20/20 Campaign kicked off with a performance by Petunia and the Vipers in the newly-renovated Palace Grand Theatre on May 19th, 2018 and culminated with a New Year’s Eve “Odd Ball 2020” as the clock turns to 2020 — a mirror of the historic KIAC event that ushered in the new millennium.

“The upcoming twentieth anniversary is an opportunity to celebrate everything we’ve achieved! The facility can attest to the impact our activities have had on the community,” says Peter Menzies, President of the Dawson City Arts Society. “The 20/20 activities are being planned as both fun events and fundraisers so we can keep going for the next 20 years!”

Leading up to New Year’s Eve 2020, we celebrated individuals who have made major volunteer contributions to KIAC over the past twenty years.  Volunteers were highlighted in KIAC’s weekly email newsletter, on the KIAC website and in the Klondike Sun newspaper:

Palma Berger, who was on the first KIAC Board back in 1998 and served as Secretary to the Board until 2008. She took on the herculean task of creating two large scrapbooks that tell the tale of KIAC’s growth from 2000 to 2010.

Bonnie and Chuck Barber, who have been diligent KIAC volunteers over most of the years that KIAC has been open. A major contribution has been food preparation for the Youth Art Enrichment program – they make and serve breakfast to 50+ high school students, instructors and chaperones for five days every year and they make it look easy.

Joann Vriend, who has been volunteering for KIAC since the beginning, including several years on the Board of Directors. Most of you will recognize her from the weekly summer Artists’ Market where she sells her homemade pottery creations.

Gaby Sgaga, who holds the remarkable distinction of having volunteered at every one of the 19 Dawson City International Film Festivals! She doesn’t just volunteer on the weekend itself; in the months leading up to Easter weekend, she attends as many of the film selection meetings as she can fit in between dog mushing, wood chopping, writing for What’s Up Yukon.

Maria Sol Suarez, who always brings a special flair when she gets involved in arts events at KIAC: a creative idea, attention to detail and lot of people having fun. Her legendary Gallery Hop installations have included the Bar el Cabrito night in Buenos Aires, the Twin Peaks themed Black Lodge, and this years’ Prohibition extravaganza.

Ben Horodyski, who has been volunteering at KIAC since 2011 when he came to Dawson to visit his sister Emma who was working at KIAC as the Programs Manager. His first volunteer job was washing mountains of dishes for the Youth Art Enrichment program and since then Ben has volunteered for many different KIAC programs.

Chris Healey, for sharing his expertise while he was on the DCAS Board of Directors and continuing through the development of our 2020 Fundraising campaign. Chris developed a website that staff could learn to manage. Hurray!

Parallel to the Volunteer Appreciation program we also featured sponsors.  The Sponsor of the Month was featured in signage in the KIAC lobby, a banner ad in the weekly KIAC email newsletter, a thank you ad in the Klondike Sun newsletter and verbal recognition of support at every KIAC event held during that month.

John Bailey, who has been involved in the Dawson City music and arts scene since the 1980s after his introduction to the community through visits with the late John Tapsell. Bailey was a mainstay on the tech crew at DCMF for more than 20 years and helped out at other Dawson music and arts events and provided sound tech training prior to and during KIAC’s first twenty years.

Yukon Brewing, who regularly donate libations to KIAC fundraisers including the Film Festival concession and our presentation series. These donations allow us to maximize our fundraising efforts and these benefits are shared by all KIAC programs.

Yukon Energy, who have been a sponsor of the Dawson City International Short Film Festival since its inaugural edition back in 2000. They have shown unwavering support of our initiatives, are enthusiastic about investing in our community and have been an integral part in the growing of the festival into an important date on the Yukon’s Cultural Calendar!

Duncan Sinclair, who has supported KIAC for over a decade. This year he’s quadrupled his annual gift in recognition of our 20th Anniversary. He’s got a lot to say about our work: “KIAC sets an exemplary Northern and Circumpolar example, contributes to new Artistic pathways, honours and presents Artists of all genres, disciplines and backgrounds without equivocation.

The Downtown Hotel, who have been providing accommodation for the artists in our Performing Arts Series. The many concerts and plays simply could not happen without this support. The Downtown also shows support via rooms for students and instructors in our Youth Art Enrichment program – another great program that would not happen without their support.

What’s Up Yukon, who have provided KIAC with advertising space since they began publishing. It is no mean feat to keep track of all of the goings on at KIAC, but What’s Up Yukon does a great job of helping us get the word out.

Air North, for their ongoing support for KIAC programs. This year the Air North contribution is going towards bringing the Sadies for Arts Festival. Because of their contribution, these concerts will be fundraisers for KIAC’s 20/20 Campaign and for the ODD Gallery.

Henry Gulch Explorations Ltd. John and Sylvia sponsored the launch and first fundraising event of the campaign, Petunia and the Vipers, Live at the Palace Grand. And a grand time it was!

KIAC is the reason I live in Dawson. Through Arts Fest 2016, I exhibited work and put on a weekend-long performance, meeting dozens of community members who would soon become friends. That weekend introduced me to so many other like-minded people doing wonderful things in this small town. I couldn’t leave. Now, my calendar is dotted with exhibits, music, artist talks, lectures, and events that make this small town so special. And KIAC is the nucleus. 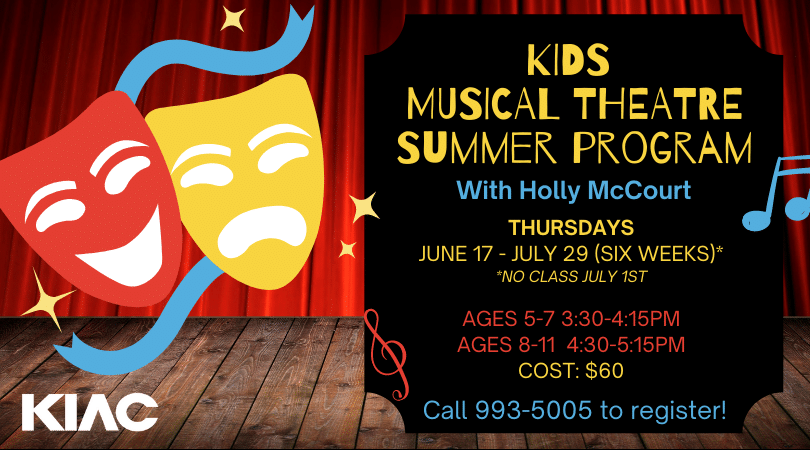