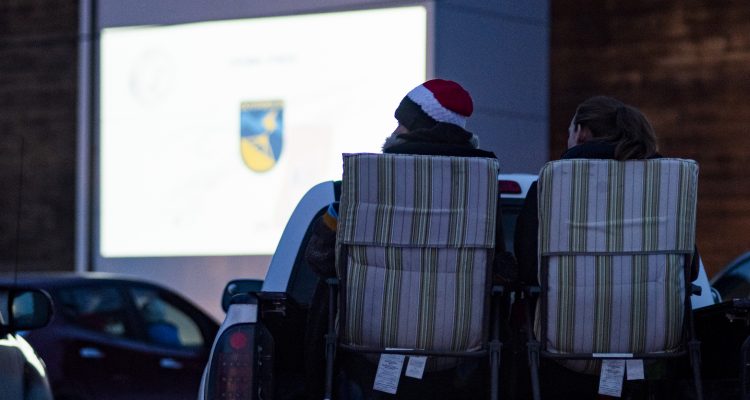 The 2021 Dawson City International Short Film Festival returned to its April time slot with people inside and outside watching films! Our cinema opened with limited seating and people responded with over half of the screenings selling out. Attendees were treated to in seat service of our wonderful concessions (a different menu every day). Our 2nd drive In night at the legendary Palace Grand Theatre was a rousing success as the snow held off allowing people to even sit outside in the backs of their pick up trucks.

We are pleased to announce the winners of the 2021 Awards.

The MITY (Made In The Yukon) Award (professional category) goes to Pandemic At The End Of The World by Allan Code. A poignant documentary featuring an elders views on pandemic old and new. Honorable mention went to Lulu’s Keating’s sharp and imaginative King Covid. The MITY is sponsored by Gold Rush, SPYA, and the Yukon Film Society.

The Emerging Artist MITY went to Claire Ness for her charming film, Keno City Hooker, set outside the now bygone Keno City Hotel. This award is sponsored by Outpost 31, the Yukon Film Society and KIAC.

The Lodestar Award for best film from outside the Yukon went to the acrobatic Talk To Me by Jules de Niverville form Québec. Heartland(Terrestes) by Norman Rajotte was given an honorable mention.

We want to thank all of our volunteers, sponsors, attendees and filmmakers that make this event possible.

Click on image below to see our 2021 slide show.