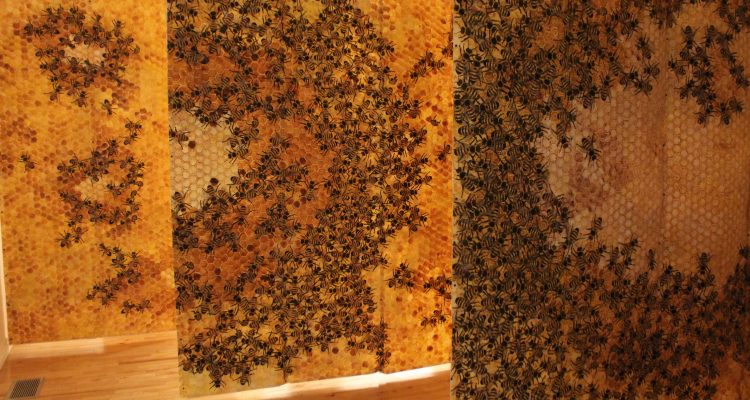 The ODD Gallery is pleased to present an immersive installation of linocut prints by Saskatoon artist Monique Martin. The large-scale prints transform the gallery space into a beehive that gallery visitors can walk through.

As humans, as animals, we are here to procreate, just like the bees. Humans fill the remainder with goals, dreams and experiences far beyond procreation. Is denying procreation counter intuitive, or is it a survival strategy just like the 1000’s of bees in the hive that do not reproduce? For bees it is about survival of the species, for humans it is so much more than just survival. There exists a cycle where one goal ends and another begins, one dream dies and another begins. Is goal setting an instinctual process or is it programmed due to experiences? Are we forced biologically to look for a new way when the old one is either completed or impossible? One bee begins where another left off, moving on instinct, awareness so engrained that the same activities, reactions and cycles occur for centuries.

Life is a continuous cycle of growing and changing, no matter who you are or where you live. Nothing is static. Nothing stays the same. Change is a constant in this evolving world in which we live. There is, however a commonality amongst animals and insects to produce enough offspring to continue the species and combat the changes in the environment. Bees coalesce in the hive forming a unified machine that can withstand almost everything, even human intervention.

Enduring, surviving and living all ring true on the continuous survival cycle. The economics of energy is fine tuned to produce on a continuous cycle in the various ecosystems. A continuous circle of cooperation exists in the cycle of survival that is ordered and industrious.

The silence of beginning again, starting over, can be deafening. The hum of continuing, moving forward, persevering, in an endless quest to survive and remain part of the unbroken whole of the world can create a similar deafening sound; deafening in the possibility of a flaw in the absolute way of survival. Continuing and beginning are similar, but yet different. The difference lies in keeping motivated and engaging motivation.

Monique Martin is a multi-disciplinary artist from Saskatoon, Canada. She has exhibited her artwork in more than 242 significant solo, invited and juried group exhibitions in ten countries. More than 50 of these were solo exhibitions in public galleries. Renowned international curators have selected her artwork for various exhibitions worldwide. Her works are held in more than forty-four public and private collections in ten different countries.

Her work often uses significant symbols or comments on contemporary social issues. Monique creates bodies of work rather individual pieces and focuses on specific concepts, she undertakes extensive research prior to creating her work, often incorporating historically significant symbols and images to express her ideas. Her works push the boundaries of standard printmaking: enormous scale printmaking, installation based printmaking and working with three dimensions in printmaking.

Every action, interaction, and observation produces an energy that vibrates within her and connects her to the people with whom she is in contact.  Sometimes a small incident, a promise only half-intended, a touch, or a casual remark, can set off a chain of events that will alter lives and change destinies. Like a pebble in a pond, the rings of energy keep moving outward from the initial touch, whether it is physical, emotional, spiritual or mental.  It is in responding to these ever-changing ripples in the connections between humans that inspires her work. Her work utilizes ever-changing concepts and images because her art is a way of exploring who she is, who she was, who she is becoming, and where she fits into the world around her.