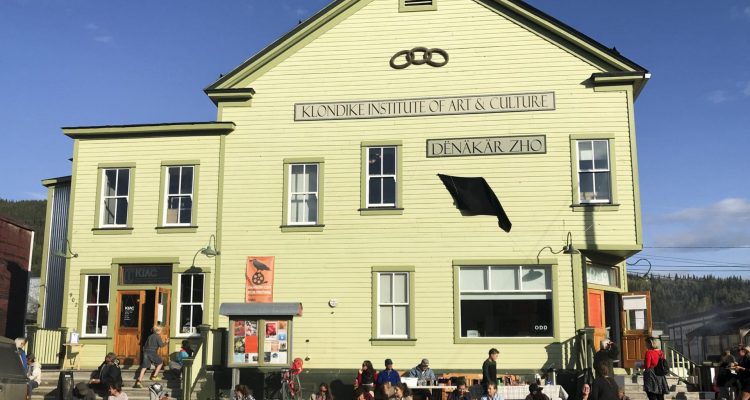 The building that houses the Klondike Institute of Art and Culture (KIAC) in Dawson City, Yukon, now has a new name in the Hän language.

“I thought it was very fitting,” said Georgette McLeod, a Hän language administrator with the Tr’ondëk Hwëch’in. “It also kind of speaks back to the building and the programs being inclusive of anyone, whether [their] gender or age or cultural background.”

The building had been known as the Odd Fellows Hall, which was originally built by the Odd Fellows Fraternity in 1901. In the late ’90s it was refurbished by Dawson’s then-fledgling Klondike Institute of Art and Culture.

“The elders council approved this name because it was a fun way of describing art and culture, as colourful,” said the institute’s executive director, Marie-Claire Findlay-Brook.

KIAC and the Tr’ondëk Hwëch’in held a ceremony Thursday night to celebrate the new name, which has been in the works for a few years. Findlay-Brook called the celebration “positive,” adding that it’s about more than just the name, it’s also a commitment to do better.

“It was just incredibly encouraging and I feel like this new name Dënäkär Zho will inspire us and encourage us and just to be a tighter and more responsible community.”

McLeod said the new name is an “exciting step forward for the language.”

“I think it’s wonderful to have another name up on the building because it really shows the presence of the language,” she said.

“I think the Hän name helps to reflect that inclusion of all of our community members.”

McLeod said the First Nation is seeing more and more organizations and governments slowly stepping up to include Indigenous languages.

“I hope they take it one step further and actually use it on a daily basis as part of their conversations,” she said.