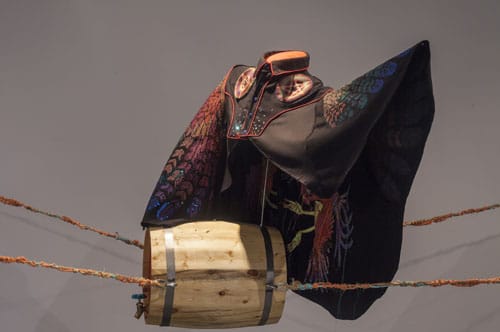 Dandy Lines is an exhibition of cosmic country embroidery referencing Western fashion through the cyclical, transformative theories of craftwork and animation. Combining textiles, sculpture, animation, and a substantial research text, Dandy Lines revisits the histories of the decorative and brings to the surface tensions between labour and identity, the body and the psyche.

Artist statement:
Working through cycles of craftwork and digital media, my work focuses on the transformative powers of craftwork and animation. Through processes of fabrication, embellishment, and performance, my works become extensions of my body and allow me to re-experience the social meanings and mythologies of boundaries. The embellishment acts as an extension of the body through the projection of identity through material and labour. Crafting becomes a gesture, or a state of activity.

By performing these gestures through the surfaces of textiles and digital media, I am illustrating the ability that craftwork and animation have to transform inanimate objects into activated things.

Bio:
Caitlin Thompson grew up in rural east-central Alberta and completed her BFA in Sculpture at The Alberta College of Art + Design (2007). In 2009, Caitlin moved to Montreal to pursue an MFA in Fibres and Material Practices from Concordia University (2015). She has recently moved back to Alberta to complete the beneficial cycle of journeying and returning. Her studio practice focuses on the relationship between the act of making and the formation of identity, specifically in embroidery and animation.