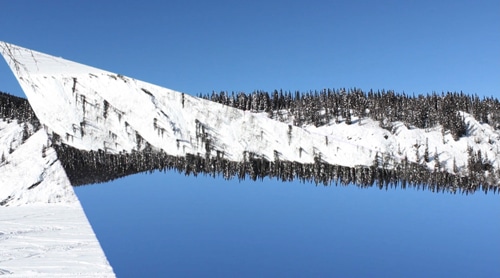 CHRISTINA BATTLE (Denver, CO) | the space between here and there

Growing up in on the edge of the prairies I always get a little on edge when surrounded by mountains. I find their scale and their three-dimensionality perplexing. Against the big blue skies of the West they appear to be strangely flat, as if cutouts of paper carefully placed in order to obstruct my view. I long to see past them.

the space between here and there (the yukon river) is an attempt to play with this sense of flatness that I experience in the mountains, to decrease the distance between me (the camera) and them (in this case the foothills along the Yukon River surrounding Dawson City) and to transform them into an active visual space.

Shot in Dawson City, Yukon Territory while an Artist in Residence at the Klondike Institute for Art and Culture (KIAC), March 2013.