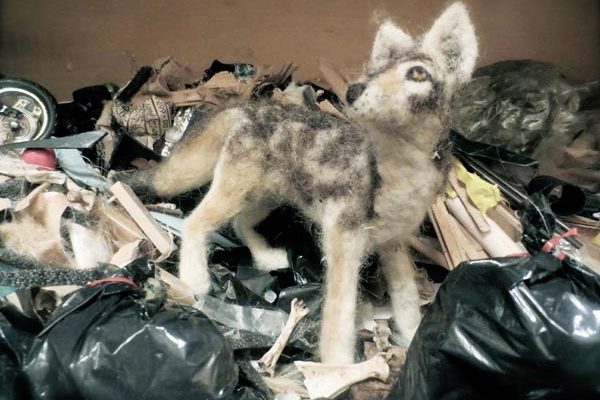 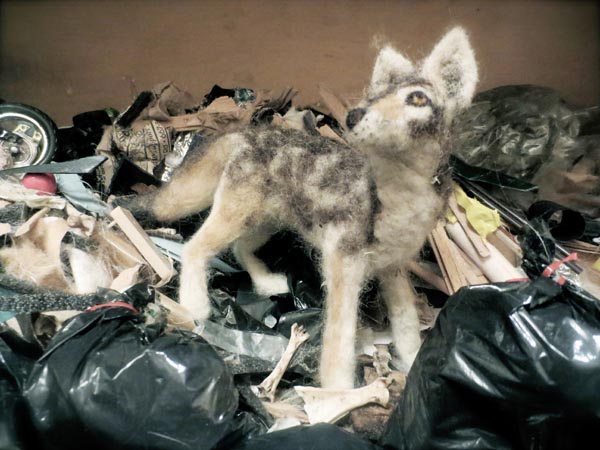 VERONICA VERKLEY (Dawson City, YT) | THEM THAR HILLS: A BACKWOODS ALPHABESTIARY
May 16 – June 21, 2013
Opening Night: Thursday, May 16th
Artist Talk: 7 PM in the KIAC Ballroom | Reception to follow
(Above image: Veronica Verkley, SCAVENGER: Coyote learns to forage, 2013.)
REIMAGINING THE NORTH: A curious series of miniature dioramas by Dawson City-based artist Veronica Verkley recombine northern mythologies, natural history, and storytelling in a contemporary context.
The installation comprises 26 musty wooden boxes (one for each letter of the alphabet) that reveal a skewed 3D storybook world: a compendium of creatures, real and imagined, that roam the boreal forests and tundra, adapting to new world situations as best they can. Rusty mechanicals, sound cues, tiny landscapes, and museum-style narratives combine to reveal the magical, hidden worlds of coyotes, sasquatches, caribou and ice worms.
BIOGRAPHY
Veronica Verkley is a media artist, sculptor and filmmaker who grew up in the wilds of southwestern Ontario and now lives and works in an off-grid Yukon bush cabin built with her partner.  She has served on the faculty of the Yukon School of Visual Arts since 2007.
Verkley’s work is founded in a wide-ranging, exploratory approach. Ranging from the mechanical to the ethereal, her creations often address concepts of a mediated, technologically enhanced Nature, juxtaposing our romanticism of the biological world with contemporary technologies. Her extensive exhibition record includes projects that traverse the mediums of sculpture, film and kinetics. Past professional work includes numerous designs for feature film, television, and theatrical productions in the field of animatronics, art direction, puppeteering, and animation.
Her short film A Working Cat’s Guide to the Klondike won the Audience Choice Award at the 2012 Dawson City International Short Film Festival and has gone on to screen at the 2013 Tromso International Film Festival in Norway. Her work is currently on view in Larger than Life: Contemporary Art from the Yukon at the Ottawa Art Gallery, produced in conjunction with the Northern Scene event.
Exhibition Introductory Essay by Dr. Curtis Collins, Director of the Yukon School of Visual Arts.
Share on Facebook Share
Share on TwitterTweet
Send email Mail
Print Print