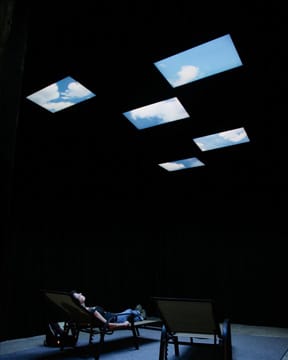 PAUL LITHERLAND | FORCE MAJEURE
March 8 – April 13, 2012
Opening Thursday March 8, 2012  |  Artist Talk at 7:00pm  |  Reception at 8:00pm
Paul Litherland’s wide-ranging practice incorporates themes of masquerade, vulnerability and machismo, explored through photography and multimedia performances. FORCE MAJEURE is a video installation that explores the moment when control is lost or gained.  Free-falling subjects float in limbo between imminent landing and freedom of flight.
PAUL LITHERLAND is a visual artist/performer living in Montréal. His exhibitions in national and international venues have been reviewed in the Globe and Mail, Artnews, the New Yorker, the Montreal Gazette, The Hindu (India), Diario Monitor (Mexico) and Excelsior (Mexico). His work can be found in private and public collections such as the Canada Council Art Bank and the Musée du Québec. Recent exhibtions include “Force Majeure” at Galerie Clarke in Montreal, 2010, “Fall Out” at the University of Toronto’s Blackwood Gallery in 2009, performing “Wood vs. Wood” in Berlin 2008, and was part of the “Faking Death” exhibition at the Jack Shainman Gallery, NYC, in January 2006.
paullitherland.com
With a sound composition by Nancy Tobin, and support from the Conseil des arts et des lettres du Québec.
Photo Credit: Bettina Hoffman
Share on Facebook Share
Share on TwitterTweet
Send email Mail
Print Print