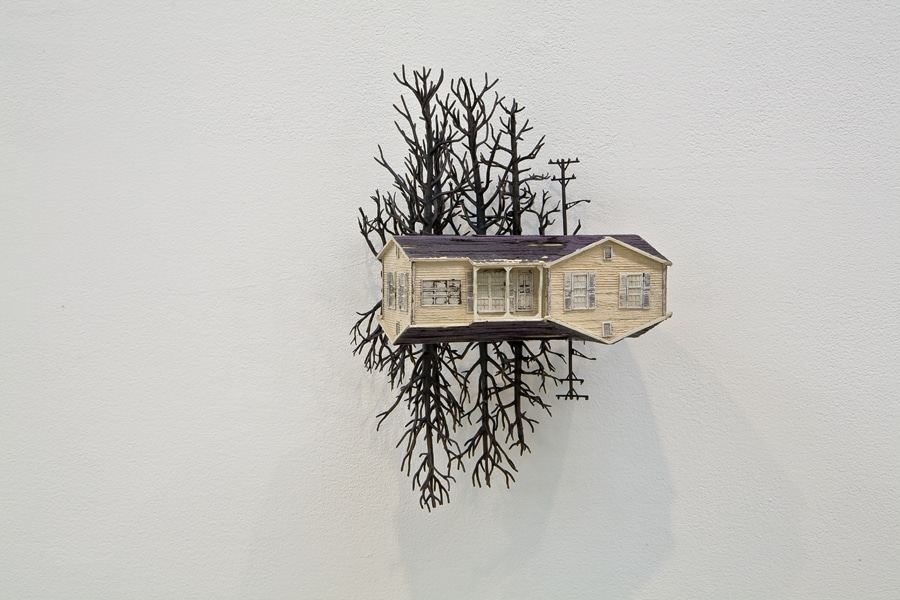 This exhibition reveals an art practice fueled by a fascination with the transformative potential of our familiar surroundings and typical scenes, their social contexts and narrative subtexts. Yates’ sculptures of seemingly banal icons of North American suburbanized living—billboards, bungalows, telephone poles and electrical transformers—evoke an overt sense of estrangement from their original, often ignorable features and functions. The apparent normality of these representations is distilled, and therefore highlighted, inviting a closer look at these living artifacts of our built world and a reconsideration of the cultural constructs that inform our most literal constructed surroundings. What do they tell us about our socialized living arrangements? Who do these fixtures serve or support?

The artist’s strategy of miniaturization, of drastic disruptions of scale, becomes key to our re-evaluation of his chosen subjects. His sculptures appeal to the innate human fascination of the diminutive—our love of models and small worlds—while simultaneously alerting the viewer to the uncanny nature of the accumulation of objects that surround us. On one hand the works seem to make a bid to reignite a childlike, curiosity (What are the lives of the people in this world like?), while on the other carry a critical suspicion that our ability to make sense of our cultural surfeit, and their complex system of underlying codes, has largely become lost (What do these objects mean?). In Yates’ work, the viewer becomes both passive voyeur and complicit participant in the miniature spectacle; he or she can look, but the gaze itself becomes part of the action.

As such, Recent Works locates an undercurrent of drama, nostalgia, melancholy and occasionally menace behind the images, objects and structures with which we cohabitate. His sculptures yield fragmented narratives, hints of suburban angst or alienation, adolescent daydreams, small-town creepiness and hidden truths that linger just beneath the surface of things. Houses, as if surrounded by a flooded yard, reveal the mirage of themselves; billboards advertise nothing in particular; electrical lines—usually the embodiment of power and communication, are relieved of their duty and extend to nowhere. As Yates himself suggests, his work finds a kinship with crime scene documentation, images that at once reveal the bare facts of the event while saying little as to how these facts came into being. A crime scene almost always lacks motive.

Not unlike the curiosity cabinets of the seventeenth and eighteenth century, Yates’ sculptures work to trace those moments when cultural objects, and their inherent social narratives, congeal in the larger process of temporality. For while it is a modern assumption to view culture as something alive and continually evolving, the myriad artifacts it leaves behind exemplify, and bear witness to, its stasis. Similar to the cabinets of wonder—where the most “morte” of nature and culture (dried and stuffed animals, rare geological formations, antiquated ornaments, plus all sorts of organic and inorganic detritus) are presented as a monument to human inquisitiveness, Yates’ incomplete Wunderkammern of the mundane looks to transpose the utilitarian into the realm of puzzlement, the typically forgettable into story. His works mark the desire to grasp and give shape to the mystery that makes the barter between culture and nature an enthralling realm.

I see my work functioning like film stills—objects that hold space like a “pause” so the viewer can examine and inspect. I’m particularly interested in crime scenes, in the cold relationship that exists between the tragedy depicted and the scrutiny of the viewer.

To echo this gaze, this sense of distance, my work often takes the form of highly realistic miniatures. Miniature objects are experienced both as real physical objects but because of their inaccessible scale they read also as an image. The realism of these works is an important aspect of the subject’s believability. Working in this scale, I realize that there will ultimately be flaws in the accuracy of the object represented. However, the use of the miniature—my attempt at realism and the inevitable imperfections of this attempt—allows my works to collapse and expand in the viewing space from object to image.

In printmaking there is a term called “The Reserve” which refers to the negative area of a print, a space that holds no information. Transposing this technique to my installations, incorporating the gallery itself as this negative space, I am able to control the amount of information that is given out to the viewer and ultimately suggest larger, less directed narratives. My attempt with many of my recent works is to create experiences that confound the expectation of knowing-though-seeing, thus setting the stage for a perceptual mystery.

Kevin Yates (b. 1974, Owen Sound, Ontario) graduated from the Nova Scotia College of Art and Design in 1998, and completed a Master’s of Fine Arts degree from the University of Victoria in 2001.

Currently Yates is living in the Toronto area, where he also works as an assistant professor of fine art at York University.