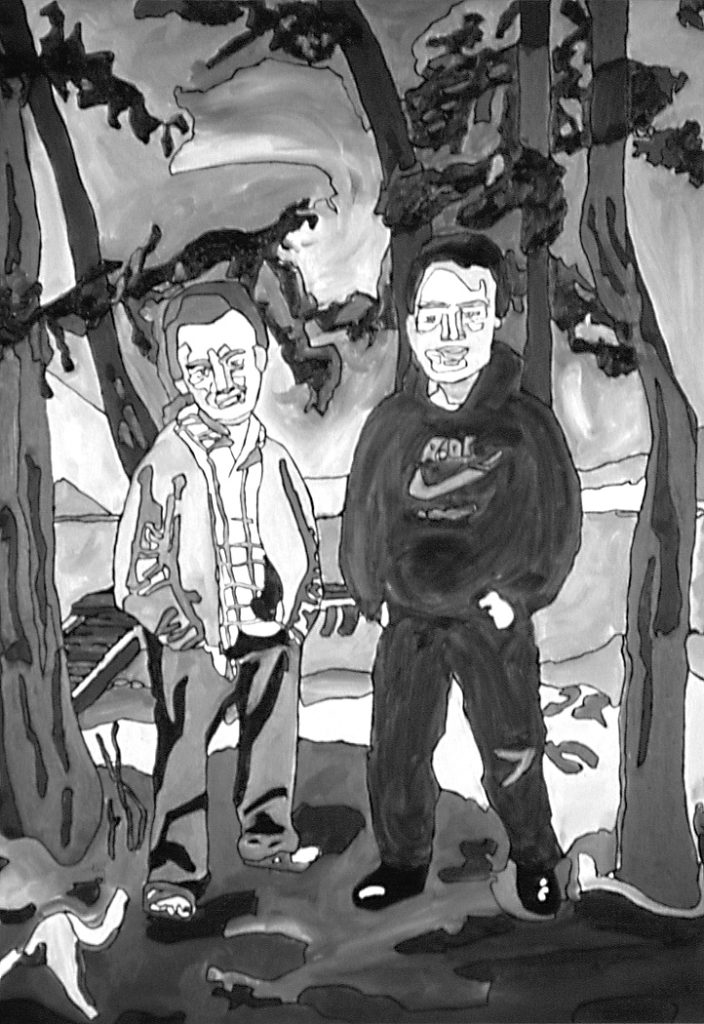 CARL BARNEY | NEAR THE BORDER OF THE MAP

“I first met Carl Barney in the fall of ’92 when we were both working at a Whitehorse coffee shop. Fresh to the Yukon that summer, we were about to experience our first wide eyed winter of stolen firewood, punk rock forty below, and running with spirited beatniks, deadbeats, hippies, folkies and old world Yukoners. I liked Carl because he dug everything. He breathed in the newest, weirdest, beat culture he could get his hands on. Avant garde, hip hop, punk rock, degenerate art, pop art- it was all there to be drunk in.

I think Carl started to paint the summer following the winter of ‘92. All that art and life he drank had to bust out of him sooner or later. Seeing as how he lived his life as a champion of the Do-It-Yourself punk ethic, there was no call for mentoring, lessons or school for Carl. He just went to work documenting everyday scenes of his friends and family.” –Andrew Connors, Co-curator

“Carl Barney paints familiar people and their environments simply as they are, without sentiment or judgement. Within his work we can see ourselves, drinking with friends in the woods by a lake, collectively mourning the loss of a friend through suicide, spending the day fishing, making our way through an alienating forest, or meditating on our existence and the nature of our identity. He portrays us not so much as Yukoners, but as part of a universal collective that lives out life much the same all over the world. His paintings of Yukon and Ontario, and the people who inhabit them are truthful and unabashedly contemporary. This is the official us, this is “Canada’s True North”, not always so strong and certainly not free.” – David Curtis, Co-curator