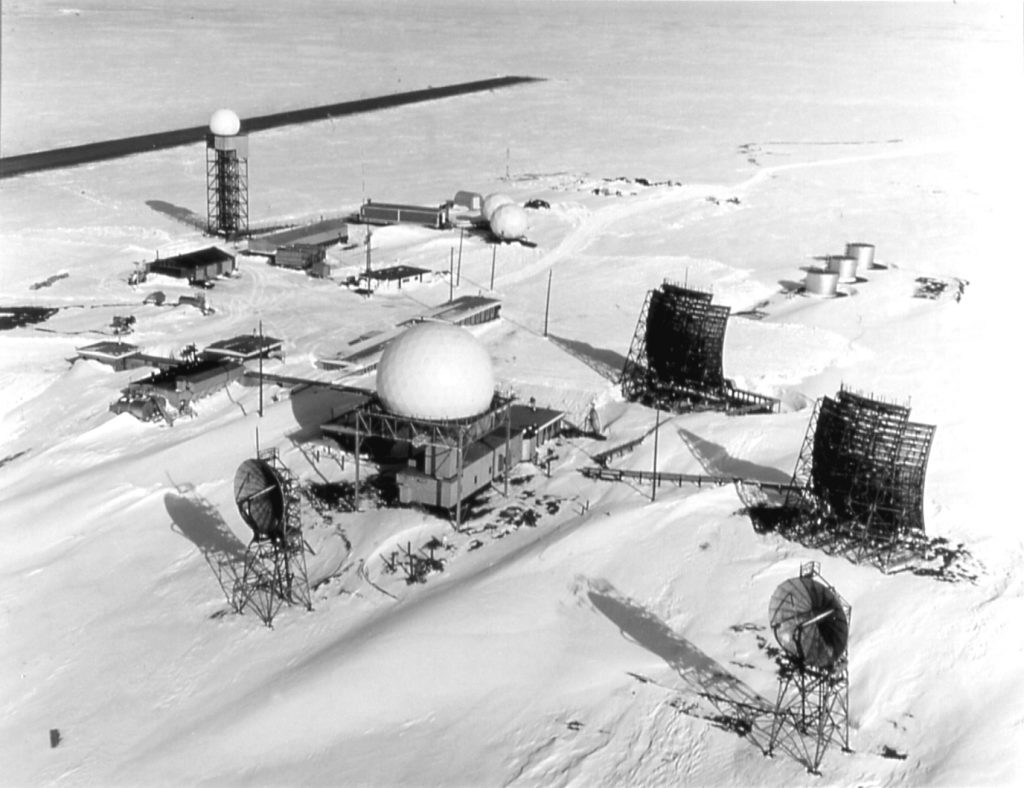 Baudrillard in his America writes “America is the original version of modernity. It ducks the question of origins; it cultivates no origin or mythical authority; it has no past and no founding truth… it lives in a perpetual present.”

The story of modern North America is the continuing revision of utopias. Modernism is the action of first principles on a blank slate – a time with only one moment in a place with no past. The ultimate example of modernity is perhaps the thin string of Buckminster Fuller’s glistening geodesic domes with their electronic curtain extending upwards into the arctic heavens during the 1950s and 60s. Designed to protect suburban utopias, the isolated stations of the Distant Early Warning (DEW) Line were a mysterious talisman
offering safety. Military secrecy – DEW workers were not to talk about their jobs, thus preserving their isolation even when away from DEW – and distance preserved the line in a cacoon of the “perpetual present.”

However, new technologies have replaced the Argus-eyed domes and the DEW Line has slipped into the past, largely unnoticed. Despite its lack of a past, of origins; it has legacies. Largely gone, most sites are marked only with an extensive gravel pad and a fire-scorched pit, the DEW Line’s legacies, which I was responsible for assembling, include administrative
files, forms, engineering drawings, strategic plans and bits and pieces of hardware. These remains carry that “perpetual present” into the future. However, the meanings are carried forward in other ways. Perhaps the most intimate of these are the photographs of the DEW Line. The creation of an image reflects meaning and attributes value – the surviving images are insights into the creation of authenticating mythologies.

Joanne Jackson Johnson selected photos from four different collections to consider these mythologies. The official images released by the military for a DEW Line press tour in the mid 1950s highlight the contact between “Eskimo” lifeways rooted in place and the unconnected modern man. J. D. Ferguson flipped this perspective in his 1956 tour of the northwestern
Arctic to study the effects of the DEW Line on the Inuvialuit. Sam Lightman captures some of the personal intimacies of the men he lived and worked with at BAR-1 in the early 1960s. Finally, Joanne’s own work, created during the last stages of the slow expiration of the DEW Line, portrays the wistful, almost dream-like, atmosphere of a passing moment in modernity.

David Neufeld grew up listening to his Groszma’s stories of the pre-revolutionary Mennonite utopia in southern Russia. These stories, and the Mennonite reliance on the past as a defining element of identity, eventually steered him into the study of history. Through both an undergraduate (University of Manitoba) and then a Masters degree at the University of Western Ontario (1979), he focused on the details of the relationship between people and place.

Returning to the prairies in the shadow of the oil crisis, he proselytized the grace offered by the adoption of alternative energy and conservation. As part of this work he curated a juried show of energy conservation graphic art produced by governments, corporations and NGOs. Returning to Winnipeg in 1985, he became the curator of the Western Canada Aviation Museum where he organized perhaps the first non-aviation art shows in a temple of Canadian flight – Toni Onley’s work from the British Columbia icefields and Karen Hoeberg’s installation piece, “Catastophe Lake”, attached chrysalis-like to one of the museum’s large aircraft.

He subsequently accepted the position as Parks Canada’s Yukon Historian and moved to the Yukon in 1990. Since then he has published extensively on Yukon history to an international professional audience and regularly presents his work to Yukoners as well. He is currently working on a history of the DEW Line and its effects in the western Arctic.